Inside one of the largest Redwall collections in the world

For 18 years now, I’ve been an avid Redwall collector. It started simply enough— there were eight books out at the time, I had to get them all and read them all, that was all there was to it. So I did. As it turned out, I got a mishmash of hardcovers and paperbacks. Wouldn’t it be nice to have a set that was uniform? I mused. So then I started tracking down all the hardcover versions. Since I’d be getting all the yet-to-be-released books in hardcover form, that would be the easiest to keep up with. Until the new paperback version came out and it looked so nice and it would be easier to reread with, wouldn’t it? Oh, I’ll just get both.

As the administrator of several Redwall websites, a part of me felt obliged to get each new Redwall product released, so that I could share impressions and information with my visitors (which, you’ll admit, is an awfully convenient excuse for a collector to have to justify a purchase). As such, my personal library of all things “Redwall” and all things “Brian Jacques” just kept growing. Now, 18 years later, I have one of the largest Redwall collections in the world (if not the largest).

It is a collection that boasts all 25 US hardcover editions (the 22 books in the Redwall Series plus three anniversary editions). It has all 20 UK hardcover editions (the 18 books in the Redwall Series that saw UK releases, plus two collector’s editions). All US mass-market paperback editions, several UK paperbacks that had cover art distinct from their hardcover counterparts, several advance reading copies, a variety of audio book editions, a complete set of Redwall Sculptures, puzzles, calendars, several anthologies that Brian Jacques contributed to, his six early works, posters… it’s honestly incredibly cumbersome to list everything.

So, I thought I’d show you, instead. 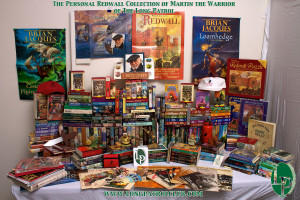 If there’s one thing collectors love to do, it’s show off their collection. A collection is the culmination of years of hard work, of searching, of finding those rare items that either few others have or that fill in that gap you’ve been trying to close for ages. As such, showcasing it is incredibly satisfying. What you see in that picture is the majority of my Redwall Collection. In fact, I’d say that’s roughly 85% of what I own. (Yes, there’s even more, if you can imagine that.)

As I said, I always felt something of an obligation to tell my visitors about Redwall products and what sorts of things are out there that they might be interested in. While there’s a general knowledge that multiple editions exist, there’s seldom a run down that tells you “This is what you get in this edition, this is what you get in that edition, while over here you’ll get A, but not B.” I’ve tried to fill in that gap somewhat on The Redwall Newsline and in reviewing things like the Mossflower Collector’s Edition, but that method is ill-suited when the only thing an edition offers you is a new cover (that’s a pretty short review).

The solution I’ve reached is to take you inside my collection, piece by piece. I began working on this project for The Long Patrol’s 15th Anniversary in 2011, where I’d initially thought it would be a single article that covered everything and that would be it. When the Anniversary arrived and the write-up was incomplete, the collection had not been gathered into a single place, and no photographs had been taken— I knew I could rush it, but knew it would be doing the entire project a disservice. As I became more serious about redesigning the site (for the first time since 2002), the project got delayed further and as the collection continued to grow, new support files were necessary. Happily, it’s now reached the point where I can start releasing bits and pieces of it and welcome you into my world of all things Redwall.

Here’s how that will work.

What you see in that picture is an assortment of Redwall products. Several of them are related to one another, as they are simply different editions of the same book. For example, I own 20 distinct editions of Redwall alone. Each new essay in this series will walk you through a portion of my collection that is related in some way— for instance, I’d probably review all five sculptures at once rather than one-at-a-time. My hope is that each essay will be informative, reveal some Redwall products you didn’t know existed, or highlight an edition you’d heard about, but didn’t know you actually wanted. My collection numbers over 250 pieces (some elaborate gift sets, some as simple as a pencil), and like I said, only about 85% of it is featured in the above picture.

I’ll be keeping an index of all my essays here, although each new post will be featured on the homepage when it goes up.

To kick things off, I decided to tackle what will easily be the longest one of these essays I’ll have to write: Redwall itself. As I mentioned, I have 20 distinct editions of Redwall and I’ll take you through each and every one. Along the way I’ll sometimes reminisce about how I acquired that particular copy, what its significance is for me, and offer a few opinions on whether it’s worth tracking down yourself.

This has been an incredibly personal (and fun) feature to work on over the last few years and I’m excited to finally be able to share it with other Redwall fans. And so, without further ado, read on!