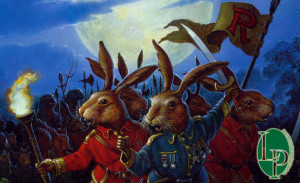 It has been a long road to get us to this point.  The Long Patrol was founded on this day in 1996– August 15th, 1996, to be exact.  In the 18 years since then, the site has grown and morphed in ways I could not anticipate but for which I will always be grateful.

On our first anniversary in 1997, I redesigned the website from the ground up. It was a gigantic step forward (at the time) characterized by such revolutionary design possibilities like: Image backgrounds! Two columns! A 3D logo!

Or, rather, it was revolutionary compared to what came before it.  That design stuck around until 1999 or so (with a few minor tweaks in the interim), when it was replaced with what I call my “dark” design since the background was not conducive to see text, necessitating the use of grey boxes throughout the design (the hexcodes for each shade of grey is permanently etched in my mind from typing them out so often).

The design was tweaked again in 2001, which proved to be the last design on our original AOL webspace.  When we finally made the move to our own webspace in 2002 (after our sixth anniversary), I debuted what would prove to be the longest running Long Patrol design, running for 12 years.

I relate this history in part because it’s the anniversary and that always makes me nostalgic, but more to underscore that in the first six years of this site, it underwent five major redesigns. For the next twelve, it stayed static.  In that time, computer monitor resolutions changed, making that design incredibly narrow and honestly cumbersome to update.  I knew that and several years ago began work on the redesign you see before you, although it’s undergone several behind-the-scenes iterations in that time.

That’s a long and meandering way of saying: behold! At long last (and long overdue), The Long Patrol has been redesigned from the ground up! It not only looks spiffy, but is far more functionally responsive under the hood and that will facilitate more frequent updates down the road. But so as to not come to this occasion empty handed, I bring two new features.

While the overarching design is in place, there are countless tweaks to individual pages that I’ll be making in the weeks ahead.  Pardon the dust as we settle into the new layout.

As always, I’d love to hear from you all.  I invite you to head on over to our Forums, where we’ve got a lot of interesting discussions going.

Above all, thank you for supporting the site over the last 18 years and I hope to still see you 18 years from now!