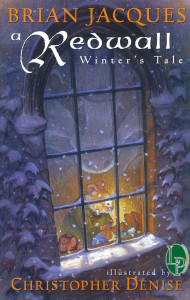 US Hardcover
Art by Christopher Denise

“Cumm in, zurrs an’ marms, afore ee all freezes!”

So says the molebabe Bungo to the Thistledown Troupe in A Redwall Winter’s Tale.

I’ve been eagerly awaiting the release of Winter’s Tale since it was first announced oh-so-many years ago. Brian and Christopher’s first collaboration, The Great Redwall Feast, holds a special place for me since it was released shortly after I first started reading The Redwall Series. At that time (when the ROC was small), I was one of a precious few who actually bought the book. To this day, most fans overlook the Denise books and, for the life of me, I cannot fathom why. When they work together, Brian and Christopher almost seem to be two halves of the same person, each complementing the other to create a magical world where mice build Abbeys and feast aplenty.

Being a children’s picture book, the plot is straight-forward, although it contains more depth than Feast. It is the last day of Autumn and the Redwallers are celebrating (when aren’t they?). At the Abbey is a group of performers, the Thistledown Troupe (which is not unique from any past Troupe, save for the fact that their ranks include a male badger). After the Troupe’s performance, the dibbuns are sent off to bed. Naturally, young Bungo protests that it’s unfair to make them go to bed while the grown-ups get to stay awake. As a compromise, Bulbrock the Badger, a member of the Thistledown Troupe, tells Bungo, his hogmaid-partner in crime Tubspike, and the rest of the dibbuns the story of the Snow Badger!

The Snow Badger story is a wonderful addition to the Redwall mythos. The “Snow Badger” is Brian Jacques’ answer to Santa Claus, Jack Frost, and all other variations of winter-themed legends. The Snow Badger, Lord of Wintertide, is responsible for the white blankets of snow, for the frost on the windows, and all things wintery. Like Santa Claus, though, if any dibbun sees him, he runs away. Brian’s crafting of the Snow Badger legend is very reminiscent of Richard Adams’ “El-Ahrairah” tales in Watership Down or J.R.R. Tolkien’s “Father Christmas Letters”. Great thought has been put into the legend and it’s readily evident. The last thing I want to do is spoil it all for you.

Likewise, great care has been put into the artwork. Winter’s Tale serves as a reminder to why Christopher Denise is a master illustrator, just as Castaways of the Flying Dutchman served as a reminder to why Brian Jacques is a master storyteller. In contrast to Feast, it’s almost as if Christopher was given a 96-count box of crayons instead of 32-count. Under his watchful eye, Redwall Abbey comes alive with a warmth and hominess that could never be translated into the television series. Throughout the book, there is a theme of transition. At the beginning, it is the last day of autumn and the paintings reflect that. Colorful leaves, greens aplenty. Very similar to Feast, although with a more dreary sky. The paintings perfectly emote some autumn days of my childhood. Then comes the Snow Badger and with him, snow. The settings become all white and blue. You can almost feel the chill in the air. I’m continually amazed at how Chris accomplished this.

Not only is the art beautiful, it’s multi-faceted. There’s so much to see on every page that it will take repeated readings to catch it all. The first and last page, for instance, show us Father Abbot in the Gatehouse drawing pictures on a desk that, I’d wager, is not unlike the one Mr. Denise actually uses. Also on those pages, in the background, hangs a map of Mossflower Country, the first time Mr. Denise has illustrated one. Or, there’s the two-page spread where the Snow Badger first appears. The point-of-view is situated in the bell tower, the two bells on either side, overlooking the Abbey roofs as the giant Snow Badger walks out of the clouds. Your attention will, primarily, be on the Snow Badger. But, if you look at the bells for a moment, you’ll see “THIA” on one and “ETHU” on the other. Obviously, “MATTHIAS” and “METHUSELAH”, respectively. That’s just one of the little touches thrown in for Redwall fans and I haven’t even started on the dibbun dormitory or the Snow Badger’s Snow Hare army (what is a badger without hares?).

All in all, no Redwall fan will be disappointed by this book. The art and thought put into it more than make up for the short length. I eagerly await the next collaboration between Jacques and Denise.