Build Your Own Redwall Abbey 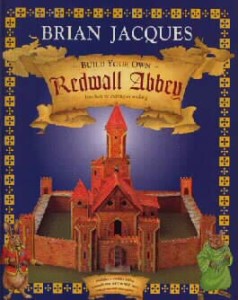 If you’ve ever wondered what Redwall Abbey looked like, or the layout, this product is the one for you! Build Your Own Redwall Abbey comes in the form of an oversized hardback book. Open it and inside you’ll find two pockets: one containing 23 pre-assembled pieces (no cutting, gluing, taping or punching out required) and an instruction booklet; the other containing a 16 page story, The Redwall Warrior’s Code and a punchout sheet featuring 16 characters from the Tales of Redwall, the belltower and the weathervane.

The Abbey can be assembled quite easily with mere folding keeping things in place. Once assembled, the Abbey stands about 16″ tall and rests on a laminated mat depicting the Abbey grounds. The mat measures about 32″ x 23″. What will surprise you is the amount of detail and care put into the Abbey itself. Little details such as “Redwall” being written on the wall of the stairs between Great Hall and Cavern Hole (from the riddle in Redwall) to the great tapestry hanging in Great Hall, as well as famous rooms like Great Hall, Cavern Hole, the Abbey Kitchens, Sparra’s Nest and Dormatories, are all included and will delight longtime fans.

The short story, The Redwall Warrior’s Code, takes place a few seasons prior to the events chronicled in Redwall. It relates the tale of a young Matthias and his friend, Cornflower, as they, with the help of Abbot Mortimer, Brother Alf, Constance the badger, Old Methuselah, Ambrose Spike and Basil “Stag” Hare, search the Abbey grounds for the answer to the mysterious riddle of the Redwall Warrior’s Code. The riddles, carved in various places in Redwall, are included in the given locations on the actual abbey you build. With the storybook and punch out characters (which include: Matthias, Cornflower, Squire Julian Gingivere, Sela the Vixen, Ambrose Spike, Cluny the Scourge, Captain Snow, Abbot Mortimer, Jess Squirrel, Warbeak, Chickenhound, Foremole, Constance, Methuselah, and Log-A-Log) fans will be able to act out their very own Redwall adventures.

Build Your Own Redwall Abbey is illustrated by Tony Lodge and Bob Venables. It is available in both the US and UK wherever books are sold.