Castaways of the Flying Dutchman 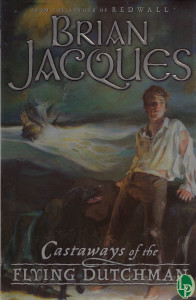 Fans of The Redwall Series eagerly awaited Brian Jacques’ first non-Redwall novel, Castaways of the Flying Dutchman. Released in March of 2001, the book gives us yet another testament of why Brian is worthy of the title “Master Storyteller”.

Der Fleiger Hollander. The Flying Dutchman. In the 1620′s, it was a ship like any other until the day it set off on it’s fateful voyage. With the prospect of riches beyond imagination, the mad Captain Vanderdecken pushes the ship and it’s crew onward, intent upon rounding Cape Horn at Tierra del Fuego. One crew-member, the 14 year old galley-boy, is a mute named Neb (short for Nebuchadnezzar). When he and his stowaway dog, Den (short for Denmark, where Neb found the dog), foil an assassination attempt against Vanderdecken, the Captain orders Neb and Den to always guard him, wherever he may go on-ship.

The water around Tierra del Fuego is rough and stormy, making navigation extremely difficult. Once, twice, thrice, the Flying Dutchman is pushed back by the waters of Tierra del Fuego, each time losing more crew members and killing the spirits of all save Vanderdecken. Again he pushes the ship towards their rough waters, and again he is pushed back. Looking up to the heavens, Vanderdecken curses the storm, the failure, and, finally, the Lord himself. Suddenly, the clouds darken and an Angel appears before the crew of the Flying Dutchman. Those lost at sea suddenly reappear, they and the men aboard the Flying Dutchman now doomed to forever sail around Cape Horn, never knowing the final rest of death, each condemned by their greed and wicked hearts.

As for Neb and Den, they are washed overboard. The Angel again appears before them, telling them they are to be spared because of their innocence. They are to be given gifts- eternal youth and speech- provided they wander the world, doing good wherever they go. As they wash to the shores of Tierra del Fuego, Neb is amazed to find that he can now speak, and even more amazed to find that he can understand Den! They’re soon found by a lonely Shepherd, who takes them back to his house and nurses them back to health. Three years pass, then tragedy strikes the poor Shepherd and he’s killed during a violent storm. The Angel speaks again to Neb and Den, thanking them for making the Shepherd’s final years happy ones and telling them they must leave this place and never look back. So begins the journey of the Flying Dutchman’s castaways.

Over two-hundred years pass and the year is now 1896. Neb and Den, still as youthful looking as before, now call themselves Ben and Ned (reversing their old names). They continue to wander the earth, obeying the Angel’s cryptic commands. Thus, they come to the quiet English village of Chapelvale, a village facing destruction at the hand of Obadiah Smithers, a businessman who wishes to turn the quiet burg into a limestone quarry in the name of “progress”. Though the village land rightfully belongs to Mrs. Winn, an old widow living on the outskirts of town, she is unable to produce the deed and prove her claim. If she is unable to prove ownership within seven days, Smithers will be able to destroy the village to make way for his quarry. Sympathetic towards the kind old woman, Ben and Ned agree to help her prove her claim and stop Obadiah Smithers. And so begins their adventure as they make friends and solve the cryptic riddles that they hope will lead them to the title deed.

Castaways of the Flying Dutchman was a wonderful book. After writing Redwall for so long, Mr. Jacques’ excitement at writing something entirely new is almost tangible and certainly contagious. The characters of Ben and Ned are wonderful and can easily stand shoulder-to-shoulder with Jacques’ Redwall creations, such as Martin the Warrior and Gonff the Mousethief. He’s given them such a rich history, that’s so barely touched, you want him to delve further and further into their past adventures. The history of the Flying Dutchman, based upon an actual legend (of which an opera, The Flying Dutchman, was also made), comes to life in his yarn, from the mad sea captain to the chilling scene where the ship and it’s crew are cursed. Full of riddles and poems, as any Jacques’ fan might have guessed, Castaways of the Flying Dutchman is a great read and I eagerly await it’s sequel, The Angel’s Command. If there was one thing learned from this book, however, it’s this: As good as Brian’s Redwall books are, he must be allowed to explore other avenues, because the results are outstanding.