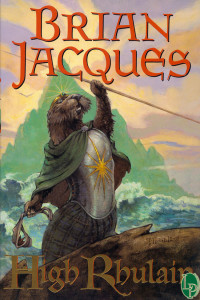 As the eighteenth entry in The Redwall Series, High Rhulain builds upon themes introduced in earlier books, almost throwing them into a melting pot of sorts to produce a story that, while new, seriously pays homage to those that came before. It was published in September 2005.

Far across the Western Sea lies the Green Isle, traditionally home to various otterclans, who in ancient times were ruled by their High Queen Rhulain. Today, the otterclans have been enslaved by the wildcat warlord, Riggu Felis, and his army of feral cats, forced to live under his rule.

After an unfortunate encounter with an osprey leaves the bottom half of Riggu’s face horribly disfigured, he (in his rage) orders that all birds on Green Isle be slain– immediately! (Adding insult to injury, the osprey is able to escape Felis’ wrath and flee Green Isle.)

Carrying out their master’s orders, some feral cats begin harassing a skein of geese passing overhead, managing to bring one of them– Brantalis Skyfurrow– down. Before the cats are able to seriously injure the goose, however, the outlaw otter, Leatho Shellhound– who has eluded Felis’ forces and continues to resist the wildcat’s rule– comes to his rescue. Freeing Brantalis and sending the cats running, he bids the goose to leave Green Isle as quickly as possible– then the outlaw vanishes once more.

Meanwhile, life at Redwall Abbey is peaceful, as the Abbeydwellers are oblivious to the situation on the Green Isle. However, a young Abbeymaid, Tiria Wildlough, daughter of the Skipper of Otters, is touched by destiny. Rescuing Pandion Piketalon (the osprey) from a band of vermin and literally catching Brantalis Skyfurrow as he falls from the sky, she learns of the otterclans’ plight and of Riggu Felis. Further, visited in her dreams by Martin the Warrior and the long-dead High Queen Rhulain, Tiria is bid to leave Redwall, find the “fool of the sea”, and sail to help her kinfolk– for it is Wildlough blood that flows through the High Rhulain’s veins!

Leaving her friends to solve the mystery of the High Rhulain and the Geminya Tome, Tiria sets out to fulfill her destiny.

On the Green Isle, the otterclans gather, a prophecy has been received. . . the High Rhulain shall return!

High Rhulain was an interesting case in that I was exposed to many opinions of the book before I was actually able to find the time to read it. The picture painted was that of a mediocre tale, of a let-down and unfulfilled potential. Surprisingly, I didn’t find that to be the case. To be sure, High Rhulain is far from the greatest of Redwall tales, but to write it off as mediocre does the tale a disservice. It kept my interest throughout and managed to innovate and pay homage to the series’ past on many different levels.

The character of Riggu Felis, for instance, was surprising. Take the brute force of Gulo, mix it with intelligence and cunning, and you have Riggu Felis. Rather than your typical vermin leader, constantly bested by the plans of the resisting woodlanders, Felis is able to outthink them on many occasions. More than any other Redwall villain in recent memory, Riggu sees through the otterclans’ feints and positions his troops accordingly, even managing to capture his most hated foe. This makes the victories that the otterclans do achieve all the more sweet, as you know they were well earned. But, more than that, Riggu also had a physical presence, most evident as he stormed up to his wife’s chambers, tossing guards around as if they were dolls and truly terrifying his son. This combination is rare in a Redwall villain and to see it surface was very nice. Further, Riggu managed to defy expectations– his disfigurement and hatred of birds never caused him to descend into madness and only resulted in him being blinded by revenge for one all-too-brief moment.

Throughout High Rhulain, I constantly found myself reminded of older stories and the various themes Brian wove into them: the otterclan struggle against Riggu Felis hearkened back to the CORIM’s fight against Kotir in Mossflower, borrowing many of the same story beats. The antagonism between Riggu and his son, Pitru, mimicked that between Ferahgo and Klitch in Salamandastron, and was probably the plot thread I enjoyed reading the most (I longed to see Riggu slay the insolent whelp and be done with it). The journey westward and ultimate island showdown was also reminiscent of those found on Mariel of Redwall’s Terramort or Pearls of Lutra’s Sampetra.

Helping to reinforce this connection with past stories were constant references to characters and clans past, from the writings of Abbess Bryony (Outcast of Redwall), the return of the Skyfurrows (Mossflower), the history of Urthwyte (Salamandastron), to even naming the otterclans Galedeeps, Streambattles, and Wavedogs (The Bellmaker and Triss). High Rhulain is firmly enmeshed in the mythos of Redwall and draws from its rich history to enhance the story.

Another welcome addition with High Rhulain is the Abbey Library (and it’s about time!). A library is such an obvious thing, it’s a wonder that they hadn’t created one before (I suppose the Recorder’s Study was a crude stand-in, but this is a welcome formalization). Adding to that, Sister Snowdrop was a very enjoyable character to read, her displeasure at Sister Geminya’s intellectual arrogance causing me to chuckle on more than one occasion. Speaking of fun characters, no review of High Rhulain would be complete without mentioning Cuthbert Frunk W. Bloodpaw, Terror of the High Seas! The hare with multiple personalities was such a tragic and comical figure, with a style all his own (and an excellent battle in the climax of the book), that he’s sure to become a fan-favorite.

High Rhulain isn’t excellent, nor is it mediocre. But, it is a great yarn and a worthy addition to The Redwall Series.