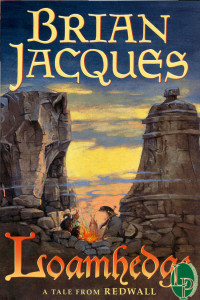 Since Mossflower, fans have desired to learn of the history of Redwall’s predecessor, Loamhedge Abbey. Following his recent trend of giving readers what they want (Luke the Warrior’s history, Lord Brocktree’s history, a woodlander among vermin, and a female swordbearer), Brian once more puts pen to paper to give us the history of Loamhedge! Or does he?

The tale begins with two otters– father and son– happening upon the remains of a pair of badgers. Or so it seems. Upon further inspection, they’re shocked to discover that one of the badgers still lives! Acting fast, the otters move the injured beast to their home and nurse him back to health. His name is Lonna Bowstripe– wielder of a mighty bow! He explains to his benefactors that he and the slain badger, a kindly old soul named Grawn, were attacked by the vermin crew of the searat, Raga Bol! Vowing vengeance, Lonna sets off after them. But, Lonna is no ordinary badger– he possesses the powers of a Seer and haunts the dreams of Raga Bol, who lost a paw in their encounter, forced to replace it with a silver hook. Fearing the wrath of the badger, Bol drives his crew across Mossflower country, with Lonna Bowstripe only a few steps behind!

Meanwhile, at Redwall Abbey, we come to know the plight of a young hare by the name of Martha Braebuck. Since the twelve seasons she and her brother, Horty, first arrived at the Abbey with their ancient grandmother (who, sadly, did not survive their journey from the Northlands), Martha has been unable to walk. Finding nothing physically wrong with her, the Redwallers assume that it’s the result of some trauma Martha suffered during the hardships of her young life. Taking a shine to the hare, the Redwallers construct a wheelchair for her so that she may move about freely within the Abbey.

Martha is given hope, however, when one night Martin the Warrior appears to her in a dream alongside a Sister Amyl of Loamhedge Abbey. Following Martin’s instructions, Martha and her friends scour the Abbey’s records for mention of Loamhedge and make a startling discovery– it would seem Sister Amyl suffered from the same condition as Martha! As the Loamhedge Mice were forced to flee their Abbey, Amyl decided it would be too hard to accompany them and chose instead to remain at Loamhedge. Suddenly, however, the miraculous occurred: Sister Amyl was able to walk! The secret lies in the ruins of Loamhedge, Martin tells Martha, and leaves her this message: Though you cannot go there, look out for two who may, travellers from out of the past, returning home someday.

Shortly thereafter, two of Redwall’s children return to their home: Sarobando the squirrel and Bragoon the otter! Regarded as legends among the Abbeydwellers– two more perilous dibbuns you never saw, say the stories–the pair ran off together when they were young for a life of questing and adventure! For countless seasons the two roamed, infamous among even vermin bands. Now entering their twilight years, however, the pair have returned home to Redwall. It quickly becomes apparent that they are the two whom Martin was referring to and, learning of Martha’s plight, they readily agree to seek out the secret of Sister Amyl. Having been entrusted with the Sword of Martin, the two set out for Loamhedge Abbey immediately, following the directions left from the ancient time of Matthias and Mattimeo. They are not alone, however. In defiance of the Abbot, three youngsters sneak out to follow Saro and Bragoon: Fenna, a squirrelmaid; Springald, a mousemaid; and Horty, Martha’s brother! Ill-prepared for the hardships outside of the Abbey, the trio of friends soon find themselves in more trouble than they bargained for when they’re captured by cannibal rats. Can Sarobando and Bragoon rescue them in time?

Elsewhere in Mossflower, through outrageous circumstances, a comical fox by the name of Little Redd comes to be in command of a small vermin band. Upon hearing of the “magical sword” of Redwall Abbey, Redd– now known as Badredd– becomes convinced it’s meant to be his! He heads for the Abbey, not knowing that the Sword has left with Bragoon. How will the Redwallers deal with this threat, now that their warriors are gone?

Loamhedge can be viewed as something of a mix between excellent and disappointing. On the positive side, it’s easily the best yarn to grace the Redwall Series since The Legend of Luke. The Abbey itself posseses a rich and vibrant life that has been absent for some time and, in a way, it feels like coming home again. Furthermore, the characters are wonderfully crafted, especially Sarobando, Bragoon, Horty, and Little Redd. You grow quite attached to them and are eager to see where their stories lead. Watching Little Redd’s rise from a low-ranking vermin to chief of a troupe that threatens Redwall itself was especially fun to read and was, perhaps, the first time I found myself actually caring about what happened to a vermin band. On the negative side, however, there’s not much new revealed about the book’s title-subject: Loamhedge Abbey. Roughly two chapters are spent on what happened to Loamhedge, and one of those is only half-hearted. While it still provides an interesting look at the events surrounding Loamhedge’s demise, keeping the air of doom intact, there’s simply not much there. While that is disappointing, the book’s many strengths more than make up for it.

The ending is well done, for the most part, and contains one of the most touching, emotional scenes to grace a Redwall book. The resolution to “Sister Amyl’s secret” was also unexpected. It had the potential to be a hollow, fantasy cure-all to paralysis, yet Brian somehow managed to avoid that pitfall and provide us with something better. There is also the briefest of moments where you cannot help but widen your eyes in shock, disbelieving that Brian would actually do what he appears to be doing! Sadly, he doesn’t really, but for a moment there we had the makings of a really memorable finale.

While it has its flaws, Loamhedge is an excellent tale, nonetheless, and is one of Brian’s better entries into the Redwall Series. It was well worth the wait and has me looking forward to next year’s book.