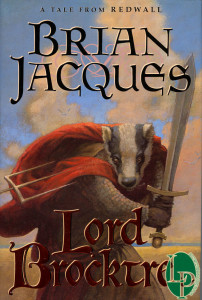 Lord Brocktree is Brian Jacques’ thirteenth novel in the Redwall Series. It was the first book to have the same publication date in both the United States and the United Kingdom (September 6th, 2000).

The Redwall Series delves even further back in the timeline (the earliest to date) to detail the rise of the organized-Salamandastron.

At the Mountain of the Fire Lizard, the aging Stonepaw is Badger Lord. But this is not the Salamandastron we’ve come to know. The only hares defending the legendary mountain are aged and few. The coasts of Mossflower Country had grown peaceful over the seasons, so the young hares went wandering, anxious to be away from their elders and eager for new adventure.

It is then that the wildcat lord, Ungatt Trunn (who is the brother of Verdauga Greeneyes, for all you Mossflower enthusiasts), leads his Blue Horde to Salamandastron, desiring the majestic mountain for his own. The Blue Horde is so-named because each member dyes his fur blue to show their allegiance to Trunn.

Stonepaw and his hares hold out as long as they can, but they are unable to repel the Blue Horde and are forced to retreat into the caverns beneath the mountain. With Ungatt Trunn in control of Salamandastron, Stonepaw places his faith in his old friend, Fleetscut, whom he’d sent to find help for the mountain.

Meanwhile, unexpected help is on the way in the form of Brocktree, Stonepaw’s son, who is in the middle of the journey to Salamandastron all male badgers must one-day take. By mere chance, he meets the young haremaid, Dotti, who is also on her way to Salamandastron. Invariably, Brocktree and Dotti’s journey crosses paths with Fleetscut and his companions, the squirrel-band led by Jukka the Sling. Learning of Salamandastron’s peril, Brocktree resolves to help Fleetscut find the army needed to defeat the Blue Horde and reclaim Salamandastron.

Lord Brocktree is yet another solid entry into The Redwall Series. Unfortunately, Brian did let some elements of his “mold” creep into the story, but not blatantly enough to dampen it. The book gives us a glimpse of Mossflower prior to, not only Redwall Abbey, but, the rule Kotir, as well. As a matter of fact, in a move that is unprecedented, Redwall Abbey is not featured in the book at all. King Bucko’s Court was an extremely interesting place and I was sorry to see that Brian didn’t explore it as much as I’d have liked. Brocktree also finds itself troubled by unfulfilled plot threads, such as Ungatt Trunn’s fascination with spiders, which receives no resolution whatsoever. Ungatt Trunn, himself, also suffers from a lack of character development which was a shame since he was really promising towards the beginning of the book. This was a great read and a good Redwall book, but finds itself lumped in the middle of the series in my order of preference.