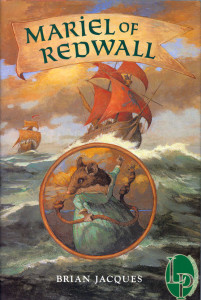 Mariel of Redwall is Brian Jacques fourth book in the Redwall Series. It was first published in the United States in 1992.
Gabool the Wild, King of all searats! The wildest searat to ever live, Gabool worked his way up through the ranks until he was finally lord over all on the seaways! All ships plundering on the seas must serve under Gabool or face his wrath. None challenged Gabool’s authority. None, that is, until Gabool captured a shrew vessel, the Periwinkle, which was transporting Joseph the Bellmaker and his daughter, Mariel, to Salamandastron to deliver a great bell to Lord Rawnblade Widestripe, Badger Lord of Salamandastron.

Gabool’s force was merciless. They left no shrew alive and took Joseph and his daughter prisoner, to serve as slaves in Fort Bladegirt, his stronghold on the isle of Terramort. Joseph was kept locked in the dungeon while Mariel was forced to serve Gabool. It was during this time that one of Gabool’s captains attacks the King and is soundly defeated. Seeing her chance, Mariel grabs the fallen captains sword and tears into Gabool, fighting wildly. Gabool, nearly beaten, is saved by his loyal pirates and he casts Mariel into the sea, to let the mousemaid drown for attempting to kill him. Mariel, tied to a piece of wood, bobs in the storm ridden sea, sentenced to doom. Someone was watching out for Mariel, however, and she washes up on a beach. Her memory, however, is gone. Not remembering who she is, she adopts the name Storm Gullwhacker, named after the storm that carried her to this beach and the knotted piece of rope, her gullwhacker. She begins traveling inland, hoping to find fresh waters and shelter. It is during her trek that she runs afoul of the natterjack toads who attack her. Storm fights bravely, but, she would soon succumb to the vast numbers of the toads. It is then that three Long Patrol hares, Colonel Clary, Brigadier Thyme and Hon Rosie, join the fray and swiftly send the natterjacks running. The three hares help Storm and quickly decide that Redwall Abbey is where she ought to go. They take her an old squirrel named Pakatugg, who agrees to take Storm to Redwall, for a price. The journey with Pakatugg is an unpleasant experience and Mariel leaves the squirrel, determined to find this Redwall on her own. She eventually stumbled onto a comical hare, Tarquin Longleap Woodsorrel, who happened to be going to Redwall himself, and the two finish their journey together.

On Terramort, Gabool orders Joseph the Bellmaker to build him a belltower for his lovely new bell, or he’ll never see his daughter again. Surprised by Joseph’s answer of “no”, Gabool has him translate the writing on the bell before pushing him out the window to fall to his doom. He then turns to more pressing business, such as dealing with Saltar, who was out for Gabool’s blood over killing his brother, Bludrigg. Laying a trap, Gabool quickly deals with Saltar. He becomes furious, however, when his own second in command and trusted friend, Graypatch, steals Saltar’s ship, the Dark Queen, the best ship in Gabool’s fleet, and sets sail for waters far away from Gabool’s maniacal rule. Graypatch, remembering past journeys, sails into the River Moss and soon learns of Redwall Abbey! The searat crew begin their trek through Mossflower to attack Redwall and claim it as their own.

At Redwall, Storm enjoys a feast with her newfound friends, Dandin, the great-grandson of Gonff, and Saxtus. As Saxtus recites a poem he recently found in the gatehouse, it provokes an unusual response from Storm. Her memory flooding back, she knows she must set out for Terramort, rescue her father and slay Gabool the Wild. Thus, she sets out on the most perilous journey of her life!