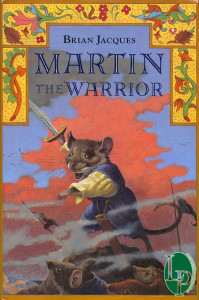 Martin the Warrior is Brian Jacques’ sixth entry into the Redwall Series. It was first published in the United States in 1994.

Winter has fallen upon Mossflower and Redwall Abbey. The gentle beasts living there enjoy days of peace and happy times. During this time, two travelers stop at the Abbey; Bultip, a strong hedgehog, and Aubretia, a pretty mousemaid. Seeing Redwall’s tapestry, Aubretia instantly recognizes the depiction of Martin the Warrior and begins to tell the Redwallers the untold tale of Martin’s youth!

Badrang the Tyrant! A more vicious stoat the northlands had never known! Scuppering his ship, Badrang and his horde marched across land, taking slaves as they went to begin the building of his fortress Marshank. During the march, he came across a young mouse, who brandished a sword in protection of his grandmother. Badrang easily takes the young mouse and his grandmother prisoner and claims the lads sword as his own. The seasons pass and the old grandmother dies, leaving the boy alone among the other slaves of Badrang, building his fortress, Marshank. One day, as the weasel captain Hisk was preparing to lash an old squirrel named Barkjon, the mouse grabbed the lash and began attacking Hisk furiously. Others came to Hisk’s aid, and though he fought bravely, the mouse was detained by sheer strength in numbers. Badrang, as punishment, had the mouse tied between two posts on top of the wall of Marshank, letting the storm whip at his small figure. The young mouse’s cry filled the night.

“I am a warrior! Martin, son of Luke! I will live, I will not give in and die up here! Do you hear me Badrang? I will live to take back my father’s sword and slay you one day! Badraaaaaaaang!”

Unbeknownst to everyone, two good beasts crept outside Marshank; Laterose of Noonvale and Grumm Trencher who were searching for Laterose’s brother, Brome. Hearing Martin’s cries, Laterose, or Rose as she was called, shouted up to the mouse, asking if there was anything she could do to help him. Unable to do a thing against the storm, Martin asked if they could keep the birds off of him when daylight came, then the young warrior passed out.

When dawn came, Badrang watched as the gulls and gannets began to circle Martin’s limp form. Right as they prepared to dive, an eagle’s cry filled the air. Again, birds swooped and the cry sounded once more. Rose had done well. Badrang, furious, marched up to the battlements and gazed over the sea. An unwelcome sight filled his gaze. The Seascarab, the ship that belonged to his old partner, Cap’n Tramun Clogg, appeared on the horizon, heading straight for Marshank! Badrang ordered Martin untied and thrown into the prison pit. There, Martin met a young mouse named Brome and a squirrel named Felldoh. While Badrang was distracted by Clogg, the three secretly communicated with Rose and Grumm and planned a daring escape from Marshank. Once out, they vowed to come back, rescue the other slaves, slay Badrang and retrieve Martin’s sword!