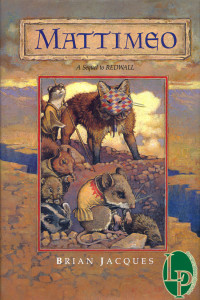 Mattimeo is Brian Jacques third book in the Redwall Series. It was published in 1990 in the US.

Mattimeo is considered a sequel to Redwall, since it deals with characters introduced in that book. It has been eight seasons since the Great War between Redwall and Cluny the Scourge. Peace has dominated the land as Redwallers enjoy the wonderful days. Matthias Methuselah Mortimer [or Mattimeo, as he is called], son of Matthias the Warrior and Cornflower, leads a group of dibbuns, comprised of Tim and Tess Churchmouse and Sam Squirrel, into all kinds of mischief. Being the son of the Abbey Warrior, Mattimeo always gets off lightly– until he attacks a small mouse named Vitch, who is a newcomer to the Abbey. Unable to overlook this, he is taken to see his father, who has been oblivious to Mattimeo’s troublemaking. After a stern talking to, and being given a list of chores he must perform, Matthias gives Mattimeo permission to attend the Nameday celebration. Meanwhile, at St. Ninian’s church, a masked fox known as Slagar the Cruel rallies his vermin horde. The fox hates Redwall and all its inhabitants, blaming them for his disfigured face. Disguised as clowns and magicians, a group of them, led by Slagar, set off for Redwall. Arriving during the Nameday celebration, the band is allowed in Redwall, where they perform. Convincing the Abbeydwellers of his magical powers by making use of a list of information provided by Vitch, who was really a rat, Slagar’s clowns proceed to amuse the Redwallers while Slagar slips a sleeping powder into their drinks. Once the Abbeydwellers have been lulled to sleep, Slagar makes his move. Quietly kidnapping some of the Abbey’s dibbuns, Mattimeo, Tim & Tess Churchmouse, Sam Squirrel and Cynthia Bankvole, the vermin band kill and injure the Redwallers that are still awake, then make their escape into the night. Awaking the next morning, Matthias and the others quickly set out to find their lost young ones and bring them back to the Abbey. Meanwhile, out in Mossflower, an army of rooks, magpies and crows watch Redwall– and wait.