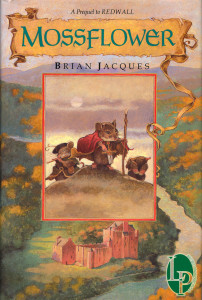 Mossflower is Brian Jacques second book in the Redwall Series. It was published in 1988 in the US. The prequel to Redwall, Mossflower is set before Redwall Abbey was built. Before Mossflower country was peaceful. It is set during a time of war. Mossflower is ruled by the wildcat warlord, Verdauga Greeneyes. The woodlanders, fed up with his tyrannical rule, all leave their homes and find refuge in the depths of Mossflower woods while the CORIM (Council of Resistence in Mossflower) wages war with the wildcat army. Meanwhile, Verdauga has grown sick and has been treated by the vixen healer, Fortunata, inside his castle, Kotir. His children, Gingivere and Tsarmina, rule the land in his stead. Tsarmina, however, has plans of her own. Conspiring with Fortunata, she secretly had the vixen poison her father under the facade of treating him. During Verdauga’s final days, a traveling mouse from the northlands is brought before him. The mouse was Martin, son of Luke. Charged with traveling through the wildcats’ land carrying a weapon, his father’s sword, Lord Greeneyes receives the counsel of his children before passing his judgement. Gingivere advises his father to let the stranger go and continue on his way, while Tsarmina demands that he be executed. As a compromise, Verdauga orders the mouse be thrown in the dungeon for a few seasons, then be released. Enraged by this, Tsarmina grabs Martin’s sword and snaps it in two, giving him back the broken handle. As the warrior is led away, he swears that one day he will slay the wildcat. In the days that follow, Verdauga dies and Tsarmina frames Gingivere for the murder. Casting her brother into the dungeons of Kotir, she assumes the role as Queen of Mossflower. Lady Tsarmina, Queen of the Thousand Eyes. A season passed and spring came. A young mouse named Gonff is thrown into Martin’s cell, and the two become fast friends. The CORIM mounts a rescue operation to liberate Gonff and his cellmate, which, fortunately, works. Martin is now a free mouse, dedicated to helping the woodlanders retake their land from the wildcat and the forces of Kotir. The woodlanders, gathered in Brockhall, the hidden home of Bella, a badger, plan a strategy to end the war and reclaim their home. Bella, taking Martin aside, tells him of Salamandastron, the mountain of the fire lizard, and asks him to journey there and find her father, Boar the Fighter, former ruler of Mossflower, and bring him back so that he may reclaim Mossflower country. Agreeing, Martin sets out with Gonff and Dinny Mole to find Salamandastron and bring back Boar the Fighter.