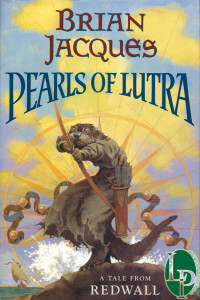 The Pearls of Lutra is Brian Jacques ninth Redwall novel. It was published in Britain in 1996. The evil emporor Ublaz the Mad Eyes had his soldiers kill the entire otter holt of Lutra, coveting the giant rose colored pearls, the Tears of All Oceans, that the holt possessed.

Two of the searat crew abandoned the crew and stole the pearls. The two corsairs fought over who got to hold the pearls. One of them, Graylunk, managed to kill the other. Taking the pearls, Graylunk went to Redwall Abbey and lived there for awhile. The Redwallers did not consider him a threat because he had a horrible head wound. Graylunk made one friend at the abbey, Fermald the Ancient who lived in the abbey attic. Fearing that Ublaz would hunt him down, Graylunk gave the pearls to Fermald and left the abbey. Sometime later, Tansy, a hogmaid, and Arven, a squirrelbabe, were out of the abbey when they found a skeleton. Further investigation proved it to be Graylunk, for he was holding Fermald the Ancient’s spoon. Being curious, the abbey recorder, Rollo, along with Martin, the abbey warrior, and Tansy searched Fermald’s room. Rollo found a scroll with a riddle written upon it. Thus began Rollo and Tansy’s quest for the Tears of All Oceans, which Fermald had hidden throughout the abbey. Elsewhere, some creatures find an otter and nurse it back to health. When recovered, the otter makes a bow and green tipped arrows, and swears to kill the searats who murdered her holt. The otters name is Grath Longfletch, only survivor from the Holt of Lutra. Meanwhile, Ublaz sends his lizard general to Mossflower country to get the pearls away from Graylunk. Reaching Redwall, the searat crew demand that they hand over Graylunk and the tears. The Redwallers tell them that Graylunk is gone and they know nothing of the “Tears”. Not believing them, the general kidnaps Abbot Durral and little Viola Bankvole, ransoming them for the pearls. Outraged, Martin, the Skipper of Otters, Clecky, a hare, and Gerul, an owl, set off to rescue the Redwallers and to slay the lizard general.