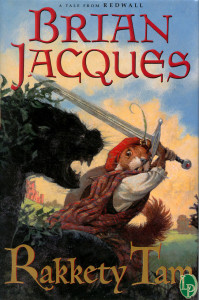 For his seventeenth entry in The Redwall Series, Brian Jacques puts pen to paper to detail the yarn of the Highland Warrior Squirrel, Rakkety Tam. It was released in late-August 2004 in the United States.

The tale will be one familiar to Jacques’ fans, that of a warrior undertaking a perilous journey in pursuit of a vermin horde and its malevolent leader. The many new elements Brian injects into the world of Mossflower, however, keeps the story from becoming a stale retread of journeys past.

At Redwall Abbey, two aging travelers return home– Wandering Walt and Hitheryon Jem– with a story of a most perplexing encounter. A ways south, they happened upon a rather large beast trapped under a fallen tree, dying, but raving mad. Identifying himself as Askor, the beast proves to be a wolverine who dies soonafter, leaving the Redwallers with a riddle about a mysterious Walking Stone and a dire prediction that his brother, Gulo, is pursuing him. Unsure what to make of this story, the Redwallers nonetheless set about deciphering Askor’s odd riddle.

Elsewhere, by the shores of Salamandastron, Gulo the Savage and his horde of white ermine and foxes make their landing. Hailing from the Land of Ice across the Great Northern Sea (the homeland of Mariel and Joseph? Unclear.), they seek Askor so that Gulo may obtain the Walking Stone– a symbol of leadership– and cement his claim as head of their clan. Adding to their terrifying nature, Gulo and his followers are cannibals who eat the flesh of their fallen foes and anybeast unlucky enough to cross their path!

In a nearby grove, a fool of a squirrel named Araltum has set himself up as a king alongside his wife, Idga Drayqueen. In their service we find two squirrel warriors from the Northlands, Highlanders, Rakkety Tam MacBurl and Wild Doogy Plumm. Long since regretting their decision to swear their swords to the foolish royals, Tam and Doogy desire to be released from their pledge, free to go wherever the wind may take them. With Tam and Doogy locked up for insubordination, Araltum and Idga hold a parade in their own honor, marching right into the bloodthirsty horde of Gulo the Savage! Barely escaping with their lives (their followers not as fortunate), Araltum and Idga free Tam and Doogy and charge them with retriving their royal banner– stolen by Gulo during the encounter. Sensing their chance, the two Highlanders agree, on the condition that they be released from their pledge upon the banner’s safe return. With the Squirrelking’s assent, Rakkety Tam MacBurl and Wild Doogy Plumm set off in pursuit of Gulo the Savage, on a journey that will have them crossing paths with The Long Patrol, the Badger Lady of Salamandastron, the GUOSIM shrews, a greedy volethief, and the inhabitants of Redwall Abbey– not to mention the mysterious Walking Stone!

Rakkety Tam ran the risk of being incredibly formulaic, but instead Brian drew upon the atmosphere and charm of his earlier books to create one of the most compelling casts of characters in a long while. The warrior in pursuit of the vermin leader who has to defend Redwall Abbey in the process isn’t a groundbreaking premise, but despite that it never felt like I was reading an old Redwall book with new names.

Characters is where Rakkety Tam shines. Rakkety Tam himself is what one would expect from a main warrior, but it’s his companion, Wild Doogy Plumm, that stole the show. Reminiscent of Gonff, one can’t help but think that Brian put a bit of himself into this character, too. From Highland accent, his playful banter with Tam and their companions, and his deep sense of friendship, Doogy hit all the right notes. One might even say that this was a “buddy” Redwall novel.

Of course, it’s not just Doogy– the thieving vole, Yoofus Lightpaw, is another inspired creation. What Yoofus wants, Yoofus takes. He’s not a malicious character, but neither is he trustworthy. Whereas Gonff had a Robin Hood quality to his thieving, Yoofus is far less selfless. Put Yoofus and Doogy in a scene together (and there are many) and you’ve got some interesting– and incredibly fun– reading.

No review would be complete without mentioning the new additions to the Redwall mythos, namely the Land of Ice across the Great Northern Sea and the introduction of wolverines. On the Land of Ice, it’s simply backstory material and probably won’t answer any deep questions about what lies beyond the Great Sea. The picture painted is certainly inhospitable, making it hard to envision it as the land where Joseph the Bellmaker hailed from. As for wolverines, they are a species ideally suited to take on a badger– similar to the wildcats. Little touches, such as tufted feet, do wonders for crafting a mental image. One of its greatest strengths, though, is in Gulo himself. Far from being the most cunning of leaders, he is nonetheless a force to be reckoned with. Actually, as you progress through the book, one almost gets the sense that wolverines are (or at least Gulo is) a force of nature.

Rakkety Tam is a Redwall tale for the ages. Those anxious to journey once more into the land of Mossflower shall not be disappointed.