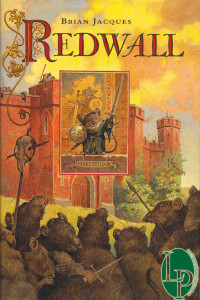 US HardcoverArt by Troy Howell

Redwall is Brian Jacques’ first book in the Redwall Series. It was published in 1986 in the US.

Redwall is about Redwall Abbey during its time of need in a war. Cluny the Scourge, a vicious rat, comes to Mossflower country in hopes of conquering Redwall. Matthias, a young mouse who lives at Redwall, mobilizes Redwall’s forces to help ward off Cluny. Dismayed that Redwall has no real weapons; such as spears, swords or daggers, Matthias sets out to find Martin the Warrior’s sword, in hopes that he can use it to defeat Cluny. Seeking out information, Matthias turns to Methusalah, the old Abbey recorder. Methusalah soon discovers a poem carved into the Abbey wall, behind the place where the tapestry of Martin, (which Cluny had stolen) hung. He and Matthias soon decipher the riddle and find the tomb of Redwall’s greatest warrior and founder, Martin. There, they find Martin’s sword belt and shield, along with another riddle. Deciphering it, this time with the help of Constance, the badger mother of Redwall, it leads them to the weathervane on the tip of the Abbey’s roof, where the sword was supposed to be. However, once Jess Squirrel climbed to the Abbey’s peak, it was revealed that the sword was missing. Methusalah then reviews the Abbey records and discovers that the sparrows, who lived in the Abbey attics, had supposedly stolen a treasure of great importance to the Abbey. Matthias sets out to journey to the sparrows domain. Once there, he is taken prisoner by the Sparrow king, Bull Sparra. He learns from the king’s kind sister, Dunwing, that the sword was taken from Bull Sparra by the dreaded poisontoothed adder, Asmodeus. Matthias must now escape the Sparra court and find this adder to recover the Sword of Martin and save Redwall Abbey from Cluny the Scourge!