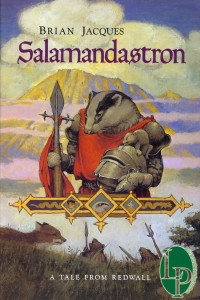 Salamandastron is Brian Jacques’ fifth entry into the Redwall series. It was published in 1993 in America. The book begins with Ferahgo the Assassin killing 2 badgers, Urthhound and Urthrun, and leaving their 2 babes, twins, to face the winter cold. One badger has a stripe, the other is completly white.

Years later, Urthstripe, the badger lord of Salamandastron is worrying over a young badger maid, Mara, who he is guardian to. She and her best friend, Pikkle Ffolger, a hare, have met two new friends, Klitch, a weasel, and Goffa, a ferret. They bring the two vermin back to Salamandastron. This displeases Urthstripe and he sends the vermin on their way the next morning. Outraged at this, Mara runs away to join her newfound friend. Pikkle follows her. They meet up with Klitch & Goffa who tell them splendor’s of living as they please, no parents or grown up beasts to tell them what to do. Klitch is actually herding Mara & Pikkle into the hands of his father, Ferahgo the Assassin, so he can get his hands on the great badger treasure of Salamandastron. Sgt. Sapwood, a hare who had been following Mara, tells her of Ferahgo and Klitch. He forces the hoard to chase him while the young badger & her hare companion get away. Meanwhile, at Redwall abbey, two stoats accidently kill Brother Hal. Realizing that they would be imprisoned, the stoats take the Sword of Martin the Warrior and bolt. A young squirrel named Samkin and his best friend, a mole maid named Arula, pursue them to try and recover the sword. Back at the shores of Salamandastron, Mara & Pikkle are attacked by a lizard and are sold to a frog king. They are imprisoned with Nordo, the shrew son of Log-a-log. The GUOSSSOM mount a raid and rescue the prisoners. Log-a-log then asks Mara to help him recover the Black Stone from a isle in the Big Inland Lake where it resides since it was taken by a a ghost. A badger ghost who is all white. Mara agrees. Meanwhile, Ferahgo mounts an attack on Salamandastron. And he’s winning.