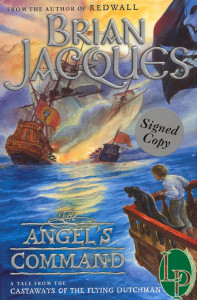 US Hardcover
Art by John Howe

With The Angel’s Command, Brian returns to the world of Ben and his faithful dog, Ned, the castaways of the Flying Dutchman. Due to the structuring of the first book, this entry can be seen as both a sequel and a prequel. The Angel’s Command is divided into two parts, entitled La Petite Marie and The Razan. Those two parts are almost separate stories, boasting only minimal connections to one another.

The first part, La Petite Marie, is set largely on the high seas. It begins in Cartagena in the year 1628 (eight years after Ben and Ned were granted immortality by the angel). Looking for food, Ben and Ned wander into a tavern where two pirate cap’n’s, Raphael Thuron and Rocco Madrid, are gambling over a game of shells. Thuron is losing, badly. With ever a watchful eye, however, Ned soon notices that Madrid is cheating. In retaliation, he goes and takes one of the pirate’s coins, ingratiating himself to Thuron in the process. Having Ben relay his messages, Ned helps Thuron expose Madrid’s cheating. Thuron then takes back his money by force. Now possessing a small fortune, Thuron can’t help but believe Ned and Ben to be his “lucky charms”. Hastily, they flee from the tavern before Madrid and his crew can retaliate. Not being able to stay in Cartagena anymore, having run afoul of Rocco Madrid, Ben and Ned are offered passage on Thuron’s ship, the La Petite Marie, since he is unwilling to let his “lucky charms” out of his sight. Having all the gold from the game, now, Thuron intends to retire from his pirate life and return to France to live out his days in peace. And, so, they set out to sea, pursued by Madrid and his ship, the Diablo Del Mar. Thus begins one of the most exciting sea chases! Things get even more dangerous, though, when, while hiding in a cove to evade the Diablo, Thuron and the Marie run afoul of a British privateer, “Redjack Teal”, Captain of the Devon Belle. Now pursued by two vessels, the race is on. Can the La Petite Marie make it to France safely? Or is doom their only fate? Or will Captain Vanderdecken and the crew of the Flying Dutchman, who haunt the seas, ever searching for their two castaways, catch up to them first?

The second half of the book, The Razan, occurs on the mainland immediately following the climax of the first half. As they wander inland, Ben and Ned soon come across a wicked man who has taken a young girl prisoner. Unable to leave her, the duo free her and tie up the man, leaving him in the woods. The girl, whose name is Karay, is somewhat on the bossy side and is even revealed to be a pickpocket herself, but she chooses to stick around Ben for the time being. As they relax around their campfire, a stranger suddenly appears. His name is Dominic and he is a Facemaker– an artist whose drawings reflect the soul of the subject, not their outward appearance. His skill with the canvas oftentimes leads him to trouble, as seldom are nobles pleased to have their greed and selfishness displayed. Dominic tells them that he is going to the nearby town of Veron in the hopes of earning some money by drawing portraits at the town’s fair. Having taken a liking to Dominic, Ben, Ned, and Karay accompany him. Without the money to pay admission, though, Karay must con their way in. Even that doesn’t do much good, however, as they’re arrested for setting up a business in the fair without a license. As they’re led off to the dungeon, though, the Comte of Veron, Vincente Bregon, takes pity on them and pardons their crime. Thankful for his help, the children (and Ned) listen to his tale over lunch. The Comte tells them of his brother, Edouard, who, while passing through the mountains one day, injured himself and was taken in by a murderous thieving band known as the Razan. There, Edouard fell in love with the daughter of the leader of the Razan and they married. Edouard brought his wife back to his brother, but she died while giving birth to their child, Adamo. Unable to be near his son, blaming him for the death of his beloved, Edouard left raising the child to Vincente and the cook, Mathilde. It did not take long for the Razan to appear, though, demanding that the child be turned over to them. Vincente refused them. And so, two years after the death of his wife, Edouard himself died, poisoned by the Razan. While Vincente attended his brother’s funeral, the Razan stole into his house and kidnapped young Adamo, vowing to take the village itself if Vincente ever left in search of his nephew. Moved by his story, Ben, Karay, Dominic, and Ned vow to help the Comte. Determined, they set out to find the hidden lair of the Razan and bring the now-grown Adamo home to the man who raised him. And so the adventure begins.

Castaways of the Flying Dutchman laid the groundwork of the series, The Angel’s Command showed us how it would work. Clarifications were made, both on how the Angel gives them commands and on how strong a presence the Flying Dutchman would have after they were spared from its fate. There is a very strong sense of dread and terror in the passages concerning Vanderdecken, which make for exciting reading. As I said before, you are, essentially, getting two Castaways stories for the price of one, as both La Petite Marie and The Razan can be read and enjoyed independantly. Brian really excels with this series, perhaps due to its freshness, as his writing comes across as far more artistic. The ending is even more haunting than Dutchman’s, driving home how much Ben and Ned would like to stay, only they can’t.

There are a few awkward moments, such as the fact that one of the villains, Redjack Teal, speaks with a hare-accent (which shouldn’t bother those who have not read The Redwall Series), or the fact that Ben and Ned refer to decades spent together when it has only been eight years since they were on the Flying Dutchman. Nevertheless, these are things you’re unlikely to even notice and don’t diminish the quality of the book, whatsoever. I look forward to future entries in the Castaways series.