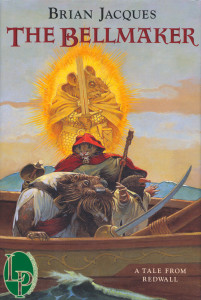 Many warriors own the glory, but the saying in Redwall is, “This is the Bellmaker’s story, Because the dream was his.”

This book begins when some of the Dibbuns were listening to a story told by one of the Abbey’s elders, an ancient squirrel, he tells the story of the Bellmaker…Castle Floret had been taken over by two theiving, murderous foxes, the dreaded Urgan Nagru, the only fox to slay a wolf and wear its skin as proof, and his mate, Silvamord, who was the equal of her mate in cunning and evil. The two foxes had arrived at Floret looking starved and half-dead of exhaustion, upon seeing this, Gael Squirrellking, ruler of Floret with Queen Serena, he allowed them into the castle and ordered that they be fed and taken care of until they were fit to travel again;when, one day, they suddenly overran the king and took over the kingdom and castle Floret.

Meanwhile, four seasons after leaving Redwall Abbey, Mariel of Redwall and her close friend Dandin were off adventuring; travelling south. While, back at the Abbey, Abbott Saxtus, a friend of Dandin in his younger days, is recording events that are happening at the Abbey. One such event, is where Martin the Warrior appears in a dream to Joseph the Bellmaker, Mariel’s father, and tells him of a journey that he and four others will soon be going on. He only remembers part of the dream, but, Martin assures him that the rest will be revealed in time. And so it is. “Before the legend, before the glory, the Bellmaker’s dream fortold the story; five will ride the roaringburn, but only four will e’er return…”

In the end, well, you have to read it if you want to know who does and doesn’t come back.