The Legend of Luke 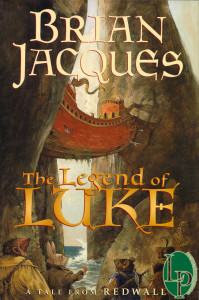 The Legend of Luke is Brian Jacques’ twelfth novel in the Redwall Series. It was published in Great Britain in July of 1999 and January of 2000 in the United States.

Seasons have come and gone in the wake of the Great Mossflower War. The woodlanders have banded together to create a haven of peace and harmony in the form of a great sandstone building dubbed “Redwall Abbey”. As the construction of the great Abbey nears completion, twin cellarhogs Ferdy and Coggs come across a hedgemaid named Trimp the Rover. Always room for one more, the twins take her back to Redwall where she sings a ballad about a brave warrior named Luke. Upon hearing about his father, Martin becomes distant and detached from the others. Sensing their good friends desire, the Abbeybeasts tell Martin to journey back to the northlands and discover the truth about his father.

Martin then embarks on his journey northward, along with his good friends, Gonff the Mousethief, Dinny Foremole and Trimp. On his journey, Martin encounters the GUOSIM shrews, a baby squirrel named Chugger, the otter holt of Tungro, Tungro’s mad brother Folgrim, the Flitchaye, the Painted Ones, a goshawk named Krar, the Dunehogs, and the otter holt of Queen Garraway. When he finally reaches the place of his birth, Martin finds a light flickering in the cave that was once his home. Inside sits an old and graying mouse named Vurg who was once the best friend of Luke the Warrior. Vurg guides Martin and those abourd the Honeysuckle (the ship the GUOSIM acquired from a vermin band) to the Tall Rocks and the final resting place of the Arfship (once upon a time named the Goreleech). Inside the Arfship Vurg introduces Martin to Beau, Denno and Dulam, three more of Luke’s friends and all that remain of the crew from Luke’s final voyage. Taking out the logbook of the Sayna, Denno begins to recount the legend of Luke the Warrior.

(switch to Luke’s time set before Martin the Warrior) Having fled their previous home in the south, Luke the Warrior leads his tribe to a series of caves in the northlands to be their new home, free of vermin. All of the mice are happy and none moreso than Luke when his wife Sayna gives birth to their child, Martin. Happiness turns to grief when Luke and the other warriors of the tribe are out transferring berry plants and Vilu Daskar’s crew attacks their home and slaughters many of their families, including Luke’s own beloved Sayna. As Luke watches the Redship (the Goreleech) sail away, he vows vengeance and begins to stockpile weapons for the day he can finally pursue the stoat who took nearly everything away from him. His chance presents itself when another vermin ship tries to attack the tribe. Soundly defeating everybeast aboard, Luke and his tribe repair the ship and re-christen it the Sayna. Leaving Martin in the care of his grandmother, Windred, Luke and a score of fighting mice left the shores of their home and began their pursuit of Vilu Daskar and the Redship.

With The Legend of Luke Brian Jacques shatters the mold he’s been using and creates a completely original and refreshing tale. The journey takes many unexpected turns and introduces many eclectic characters that are sure to become fan favorites. In addition to finally learning Luke’s tale, fans are also treated to the origin of St. Ninian’s church (it’s not what you think) and more insight on Skipper and the Mask (let’s just say they aren’t the only children their parents had). The Legend of Luke is not something a fan of The Redwall Series wants to miss.