The Ribbajack & Other Curious Yarns 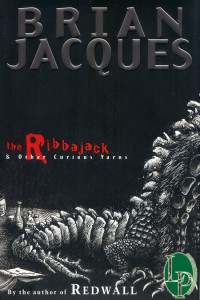 The Ribbajack & Other Curious Yarns (retitled The Ribbajack & Other Haunting Yarns for its paperback release) was published in May 2004 and is a book that very closely resembles Brian’s 1991 work, Seven Strange and Ghostly Tales. In this instance, Brian centers his book around the main story of The Ribbajack, and includes five other tales for his readers to delight in.

In the title story, The Ribbajack, Brian uses circumstances that are superficially reminiscent of the popular Harry Potter books. In fact, one might wonder if Mr. Jacques is making a subtle jab at the series. In the summer of 1926, a baby is left on the doorstep of Crostacious the Inviolate Boarding School for Young Gentlemen, with a badly scrawled note asking the faculty to care for and educate him. As payment, the baby clutches a bag full of rubies, with the note promising more on the way. Kindheartedly (although not forgetting the rubies), the headmaster and matron take the boy in. Eleven years later, Archibald Smifft is now a young man and an absolute terror throughout the school. All fear him, even the faculty, and the other children desire nothing more than to be far away from him. What’s more, Archibald dabbles in the Black Arts– magic! Not at all shy about making cockroaches appear in the matron’s pocket or having a swarm of flies chase after the headmaster, Smifft is the scourge of Crostacious! This is not enough for Archibald, though, and he desires something more sinister. So, when a boy who’s forced to stay at the school after the end of term shares a letter his father wrote him about a fearsome monster that people summon to make others simply disappear, Archibald is immediately interested. He resolves to summon the monster himself– to summon the Ribbajack!

In A Smile and a Wave, we’re introduced to a young girl named Maggie Carroll who, like most girls her age, laments over the fact that her wardrobe is so plain and sensible. So plain, in fact, that she’d rather “lose” her new jacket at school than be forced to wear it again. Of course, when her mother threatens not to let her go ice skating until that coat is hung up in the closet, Maggie conveniently remembers where she left it and must go in to school on a Saturday to retrieve it. The school looks deserted… but is it? A Smile and a Wave is rather on the short side (roughly fourteen pages), so I don’t want to give it away. However, I have to say it’s the creepiest story of the bunch and Mr. Jacques did a great job of building up the suspense here.

In The All Ireland Champion Versus the Nye Add, Roddy Mooney is the All Ireland Champion Fisherman. He loves to fish and once he’s set his sights on something, he won’t let it go. One day, he comes across ten-year-old Mickey Hennessy fishing intently. When Roddy asks him what he’s doing, the young boy replies, “I’m after tryin’ to catch meself a Nye Add!” A Nye Add, Mickey explains, is a woman who lives under the water– half woman, half fish. At this, Roddy Mooney begins to laugh and make fun of poor Mickey. When a giant tail appears, though, Roddy’s convinced Mickey’s found one of the largest fish ever and runs off to grab his own fishing gear, determined to catch it. But, what if Mickey’s right and it is a Nye Add?

In The Mystery of Huma D’Este, we’re given the tale of yet another school bully, this one named Jason Hunter. Like most bully’s, Jason has used his status to surround himself with flunkies. No student is safe from his many insults. That is, of course, until a new girl with mysterious eyes named Huma D’Este arrives. Every attempt by Jason to get the better of her promptly explodes in his face and makes him look the fool. Is Huma D’Este simply better than him or is there something more?

Miggy Mags and the Malabar Sailor presents us with a setting that will be familiar to fans of Brian’s work– it’s very reminiscent of the Castaways of the Flying Dutchman books. Here, a young girl names Miguela McGrail (Miggy Mags for short) is living with her uncle while her father, a sailor, is out to sea. Her uncle isn’t kind, though, and her only friend is the kindly Siamese cook, Atty Lok. That changes when her father visits and leaves her a present: a mongoose she names Sailor! Miggy must keep Sailor a secret from her uncle, though, or she’ll lose her newfound friend. But, can she? Unlike the other stories in the book, Miggy Mags and the Malabar Sailor isn’t spooky. Instead, it’s just a good old yarn that’s fun to read, with the most endearing main character of the bunch.

Finally, in Rosie’s Pet, the main character is once more a bully. Young Rosie Glegg strikes fear into the hearts of all that live in the small village of Nether Cum Hopping, lest she turn her eye their way. One day, while sitting in a park, Rosie meets a boy named Charlie Lupis who drops to all fours and drinks from the lake. When Rosie asks him what he’s good at, he gives her a stick and tells her to throw it. When she does, he races after it and catches it in his mouth. Rosie decides she rather likes Charlie Lupis– but he’s much more than he appears to be.

Overall, The Ribbajack & Other Curious Yarns was a fun, easy read. Each story is filled with engaging characters and rich settings (especially Miggy Mags). Furthermore, each story can be read in one sitting, making it an ideal book to grab during a short break. If there is one flaw, it’s that the stories, at times, can be uneven. Some, like The Ribbajack, end rather predictably, while others, like Huma D’Este, seem to end suddenly with the “spooky” aspect pulled from left field. On the other hand, A Smile and a Wave and Miggy Mags were decidedly fun, so the book as a whole balances out.

Fans of Seven Strange and Ghostly Tales will recognize the format of the book, as each story opens with a fun little poem. In fact, the chief difference between this book and that one is that the story count here is only six, as opposed to seven. Nevertheless, The Ribbajack is an enjoyable read full of the Brian Jacques magic. Redwall fans would do well to try it out.