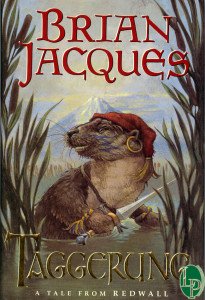 The Taggerung is Brian Jacques’ fourteenth entry into the Redwall Series, released worldwide in the latter half of 2001.

This time around, Brian is joined by Peter Standley, who replaces fan-favorite artist Chris “Fangorn” Baker (UK cover artist of Mariel of Redwall through The Taggerung, as well as illustrator of Marlfox through Lord Brocktree) as illustrator of The Redwall Series. Standley’s style is something of an amalgamation of Baker’s and the late Allan Curless’, a very nice fit for Redwall. Unfortunately, The Taggerung and The Tribes of Redwall: Badgers seem to be his only forays into Mossflower, as he will not be returning for the next book in The Redwall Series.

The Taggerung can be viewed as the flipside of the Outcast of Redwall coin. The premise for both is, essentially, the same: what if the offspring of one side were raised by the other? Whereas Outcast dealt with a ferret being raised amongst Redwallers, Taggerung deals with an otter raised amongst vermin.

In Tagg, Brian introduces a series of nomadic vermin tribes known as the Juska. Each tribe of Juska is differentiated by their leader– the tribe under the rule of Sawney Rath is known as the Juskarath, the tribe ruled by Ruggan Bor is known as the Juskabor, etc. This is one of the first times we get to see daily life of vermin and it’s just as fascinating to read about as the Redwallers are. Unfortunately, those portions are over far too soon.

Throughout their history, a fierce warrior is born who is known to the Juska as the “Taggerung”. A clan that has a Taggerung in their ranks is fiercely honored among the Juska, and so it comes as no surprise that Sawney Rath desires the Taggerung to be of the Juskarath. There is one problem, however: The Taggerung is not born of the Juska. The Taggerung is, of all things, a Redwaller.

Refusing to let that stand in his way, Sawney leads his band inland and kidnaps the newborn otter babe, spiriting him back to the coastline and escaping detection. Sawney then raises the otter as his own son, no longer Deyna of Redwall, but the Taggerung!

In typical Jacques fashion, as Tagg grows his kind, woodlander heart cannot find peace among the tribe of vermin. He longs for the place in his dreams (Redwall, although he doesn’t know it yet) and the smiling family he sees there. Even though he is the undisputed “ultimate warrior” of the Juskarath, he refuses to kill unnecessarily, which puts him at odds with his “father”. When Sawney orders him to slay a traitorous Juska, Tagg refuses, choosing exile over living under Sawney’s murderous rule.

What follows is Tagg’s journey inland, punctutuated by pigmy shrews, mad squirrels, and hedgehogs. He’s quickly joined by a new mousefriend, Nimbalo the Slayer, who has a startling past of his own. They are pursued by a band of Juskarath bent on killing the otter. Included among the band is Gruven, a stoat who has long been jealous of Tagg for, as a babe, Gruven had been named “Zann” (which means “Mighty One”) by his mother (who was convinced he was the Taggerung). His is a personal quest to show the other Juska that he is better than Tagg and more deserving of the name, “Taggerung”. This would be a more compelling aspect of the book if Gruven weren’t such a bungler. Thankfully, though, the remaining vermin in the band, led by Eefera and Vallug Bowbeast, are some of the most competent villains to ever grace a Redwall book.

While some may dislike the book because it doesn’t rock the “black and white”ness of the Woodlander/Vermin dynamic as much as they’d have liked, it really should not be dismissed. I find the world of Mossflower, where the bad guys are bad and the good guys are good, a refreshing break from the realities of the world. The Taggerung is a fine adventure story, which I found far more enjoyable than the last Redwall entry, Lord Brocktree. There are many fan-pleasing moments in Tagg, such as Sawney’s initial reluctance to go near Redwall (“The place is accursed!”. The failures of Cluny, Slagar, and Ferahgo are cited as examples of this). It is refreshing to see Redwall finally earning a reputation. The end itself, which boasts an appearance of a rather sagacious character, is unexpected and rather humorous, after a fashion. While it’s not my favorite, it’s still a great book and a worthy addition to The Redwall Series.