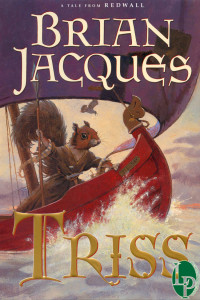 Triss, Brian Jacques’ fifteenth entry into the Redwall Series, was released to the joy of fans worldwide on September 30th, 2002.

Once more, Brian is paired with a new illustrator. This time David Elliot (who replaces Taggerung illustrator, Peter Standley). Elliot’s style can best be described as a cross between the styles of Fangorn and Gary Chalk. It falls just shy of Fangorn’s realism and has a hint of the abstract quality that graced Chalk’s work. Having grown accustomed to seeing Fangorn’s style, which Peter Standley did a good job of imitating, though, the new style took some getting used to. That said, by the end of the book I was really impressed by Elliot’s work and look forward to his future collaborations with Brian.

Long before Triss‘ release, it was known simply for its premise: A female wields the Sword of Martin the Warrior. There were many expecting a feminists tale, one punctuated with the message that “girls can do anything boys can”. Surprisingly and refreshingly, Brian takes a different approach. The heroine of the book, Trisscar the Squirrelmaid, is not presented as being a girl swordbearer, despite the early press. What she is presented as, though, is a swordbearer. It is the most natural thing in the world for her to wield Martin’s sword and it has nothing to do with gender (the fact that she’s the first female swordbearer isn’t even mentioned at all). That is precisely how it should be.

The tale begins at Riftgard, a vermin stronghold under the rule of a royal family of albino ferrets known as “Pure Ferrets”. There, Triss lives the only life she’s ever known: a slave’s life. As she negotiates around Princess Kurda’s foul moods, Triss and her companions, an otter named Shogg and a hedgehog named Welfo, plot to escape from Riftgard by secretly building a boat to sail away in. Despite the warnings of Drufo, an elderly squirrel who was friend to Triss’ father, Rocc Arrem, Triss and her friends proceed with their plan. Unfortunately for them, they’re caught by the captain of the guards, Riftun, and thrown into a cage half submerged in water. Their secretly built boat is destroyed by the Ratguards. Knowing that execution is imminent, Drufo sneaks the three companions a file with which they can, hopefully, cut through the bars with and escape.

Meanwhile, Agarnu, King of Riftgard, summons his two children, Kurda and Bladd. Agarnu, it is revealed, is an illegitimate king. To rule the House of Riftgard as King, the ferret must possess both the Royal Crown and a pawring– both of which were lost, along with the previous king (Agarnu’s father), Sarengo, on an ill-fated mission to Mossflower Country. Agarnu charges Kurda and Bladd with sailing to Mossflower on Riftgard’s only ship and finding the crown and pawring for him. To commemorate their departure, Kurda, a self-proclaimed master of the sword, will execute their three prisoners to set an example to the other slaves: no one can escape from Riftgard.

Down south at Salamandastron, the Badger Lord, Hightor, and his wife, Merola, are shocked to learn that their son, Sagaxus, has run off in search of adventure with his hare companion, Bescarum, and the sea otter, Kroova. Deciding they’d like to see the famous Redwall Abbey, Sagax, Scarum, and Kroova head north in Kroova’s ship, the Stopdog, ready for anything fate throws their way.

At the Abbey itself, though, danger is afoot. When two dibbuns, Ruggum and Bikkle, find themselves lost in Mossflower, they unknowingly rediscover the location of Brockhall. The years have not been kind to the ancient home of the badgers, however, which now finds itself home to a nameless terror that strikes fiercely, the only warning given being in the form of a foul stench. Narrowly escaping Brockhall, the two dibbuns return to Redwall with a strange golden pawring with four odd symbols etched into it. At first disbelieving of their story, the Abbeydwellers soon set out to find Brockhall’s location based on the dibbuns’ vague directions, unknowing of the danger that lies in wait for them.

Triss is an adventure in the grand Redwall tradition. While built upon well-known elements, Brian’s execution and tying together of the various plot threads make it as fresh as if it were the first book in the series, rather than the fifteenth. What makes this book especially significant is that it marks the first time that there has been an entirely new cast, with no carry-over characters, whatsoever, since Salamandastron (book five of the series). It helps to recapture the freshness of Mossflower Country.

Triss also boasts one of the better vermin leaders I’ve seen in the form of Plugg Firetail. In Plugg we have a sea Cap’n whose crew genuinely respects, even admires him. So often vermin leaders lead through intimidation and fear that the change in approach was startling, yet welcome. Fans can also expect to see a new species introduced into the world of Redwall, though I won’t spoil the surprise and reveal what species. Needless to say, it’s not one fans have been clamoring to make an appearance and will be a surprise.

While Triss is not without fault, it is one of the more engrossing tales and I wouldn’t be surprised to see it top many a fan’s list of favorites.