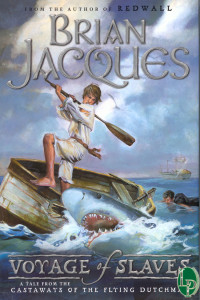 US Hardcover
Art by Michael Koelsch

Brian once more puts pen to paper to detail the adventures of Ben and Ned, the Castaways of the Flying Dutchman. Released in September 2006, Voyage of Slaves was the first Castaways book to not share a release-year with a Redwall book.

The year is 1703, seventy-five years after the exploits of The Angel’s Command, and we find Ben and his trusty dog, Ned, sailing along the Mediterranean coastline, awaiting a heavenly command. Lulled to sleep on a hot and windless day, the pair awaken to find themselves set upon by slave-traders, who seize Ben and throw Ned into the sea, leaving him to drown.

Certain that Ben will fetch them a fairly good sum, especially after learning of his ability to speak their language (for Ben was granted the ability to understand and speak all languages), the slave-traders resolve to sell him to a man named Bomba, set to pass their way the next day. Bomba’s offer, however, is far lower than they were expecting. Nevertheless, the traders agree to the price, for it is gold from the purse of Al Misurata– Lord of the Barbary Coast, whose name is enough to strike fear into the hearts of all who would hear it– that Bomba uses, and to protest is to invite death. And so it is that Ben comes to be the property of the evil Al Misurata, Lord of the Barbary Coast– slaver.

Meanwhile, Ned, having been tossed about and battered by the sea, washes ashore only to be found by the kind-hearted strongman, Otto Kassel, a member of the Travelling Rizzoli Troupe. Reminded of his childhood dog, Bundi, Otto takes Ned to the troupe and, with their help, nurses him back to health. Unfortunately, Ned’s experience with the sea has caused him to forget all about the angel, the Flying Dutchman, and Ben!

As the newest member of the Rizzoli Troupe, Ned is quickly worked into their act. Shortly thereafter, the Troupe is visited by armed men on camelback– Bomba and the men of Al Misurata, angry that they would dare to travel these lands without their master’s permission. They escort the Troupe back to Al Misurata’s, forcing them to perform for the evil slaver.

As soon as Al Misurata’s newest slave sees Ned and calls out his name, the dog’s memory comes rushing back and two castaways are reunited. Intrigued by Ben and mindful of the pretty price certain members of the Troupe would fetch, Al Misurata adopts the role of respectable horse trader, offering to give the Troupe passage back to their home in Italy. What’s more, he agrees to sell Ben to them for a low price, saying that the boy would be much happier with the Troupe. But, in truth, Al Misurata plans to sell all of them to a man named Count Dreskar in Piran.

Aware of Al Misurata’s true intentions, Ben and Ned resolve to escape the slaver’s clutches and then journey across land and sea in a race to save their newfound friends, the Rizzoli Troupe, from a life of slavery. The Voyage of Slaves has begun!

Voyage of Slaves is a tour de force, the first Castaways novel devoted entirely to a single story. If there was any doubt that a single one of Ben and Ned’s adventures could sustain a full-length novel, this lays it to rest. The story is able to build momentum and the tension continues to rise as we barrel towards Ben’s showdown with Al Misurata. The climax, in fact, is reminiscent of the many assaults on Redwall Abbey.

The cast of characters is an eclectic and memorable bunch, from the Rizzoli Troupe (shades of Redwall’s wandering troupes) to the warrior-merchant Eli Bar Shimon to the gold-toothed Kostas Krimboti. I wouldn’t mind seeing all of them turn up in future novels some day (slim chance as that has of happening).

More than either of its predecessors, though, Voyage of Slaves is a tale about what it costs to walk the path that Ben walks, of how the boy is as much cursed as Vanderdecken, never to know a normal life and raise a family of his own. With only his dog at his side, he is set aside from society, an observer outside of time, tasked with carrying out the Lord’s work. The loss Ben suffers here has the potential of weighing heavily upon his soul in future entries and it will be interesting to see if it even gets mentioned again.

For fans of Brian Jacques’ wonderful prose style, and especially for fans of Castaways of the Flying Dutchman, Voyage of Slaves is not to be missed.