- Three Long Patrol hares (Sergeant Learunner, Crocus, and Gorsepaw) are murdered by the searat king, Gabool the Wild. Their bodies are found washed up by the tide by Lord Rawnblade Widestripe.

Unnamed Winter - Fieldroan the Traveler stays at Redwall for a winter. He leaves some scrolls under the care of the Abbey Recorder, Brother Hubert.

Unnamed Summer - Joseph the Bellmaker and his daughter, Mariel, set sail from the far south for Salamandastron to deliver a great bell to the badger Lord Rawnblade Widestripe on the ship Periwinkle

Unnamed Days Later (mid-summer) - Periwinkle (Captain Ash) attacked by the searat vessel Darkqueen (Captain Saltar). Joseph and Mariel (along with the bell) are taken back to Terramort Isle, ruled by Gabool the Wild. Jospeh is thrown into the dungeon and Mariel is forced to serve Gabool his meals. 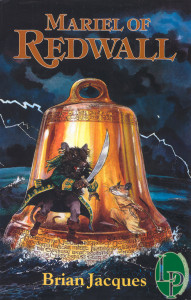 - Gabool speaks to Joseph in an attempt to get him to build a belltower. Joseph refuses, but reads an inscription on the bell on the false promise that he would see his daughter. Gabool pushes him out the window into the sea.

- Mariel washes up on the beach with no memory and fends off seabirds with a knotted rope she names Gullwhacker. She names herself Storm.

- Storm and Tarquin arrive at Redwall. Storm passes out after hearing Saxtus recite “Mariel’s Legend” at the feast.

- Sister Sage performs a type of regression hypnosis on Storm, to learn her story.

- Simeon, Brother Hubert, Saxtus, Mariel, and Dandin search for directions to Terramort so Mariel can rescue her father. They find a riddle and Mariel swears to kill Gabool.

- Lord Rawnblade sends Clary, Thyme, and Rosie to investigate the ships (theDarkqueen and the Greenfang) up north. They battle the toads they had rescued Mariel from and win.

- Mariel leaves Redwall without telling anyone and swears to return someday. She comes upon Tarquin, Dandin, and Durry Quill, who have followed her. Mariel, Dandin, Tarquin, and Durry tie up the heron Irktaan and cross a ford.

- Waveblade (Captain Orgeye) arrives at Terramort and leaves immediatly after a request for supplies is denied by a raging Gabool.

Day 8 - Mariel is frightened by a storm (reminded of the night she was thrown into the sea by Gabool). They are attacked by an adder from which they escape.

Day 9 - Mariel, Dandin, Tarquin, and Durry are captured by Flitchaye. They are rescued by Stonehead McGurney who takes them to his home. They spend the night.

- Flagg the otter discovers Graypatch outside the Abbey. After sparring verbally with the leaders of the Abbey, Graypatch declares war.

- Clary, Thyme, and Rosie discover Pakatugg’s home empty. They come upon theDarkqueen and remove its rudder making it unseaworthy.

- Bigfang challenges Graypatch, then takes the crew back to the Darkqueenwithout him and a rat named Fishgill. They reach the ship and two are slain by the Long Patrol hares. They return to Graypatch at the Abbey.

- Graypatch launches an attack against the Abbey, but retreats.

- The Waveblade runs aground on the reefs near Salamandastron. Rawnblade boards and slaughters the crew with the Bloodwrath, then falls asleep and the ship sails away.

Day 10 - Mariel, Dandin, Tarquin and Durry leave the McGurney home and travel to the Swampdark. Dandin falls into the swamp and is rescued by his companions, aided by the spirit of Martin the Warrior. Mariel then bluffs their way through scores of newts/lizards. They reach the sea and meet Bobbo. They stay the night at his house.

- Clary, Thyme, and Rosie arrive at the Abbey.

Day 11 - Bobbo leads Mariel and her companions to the place where a metal swallow that is mentioned in their direction rhyme lies. They retrieve the swallow from the deep pool, discovering it is a compass. Bobbo tells them of a ship not far away wihout mast or sails that they can sail with (the Greenfang).

Day 12 - Mariel, Dandin, Tarquin, and Durry sail the Greenfang northwest. Later, in heavy fog, it is hit mid-ship by the Seatalon and destroyed. Mariel and Tarquin are thrown into the sea, Dandin and Durry are rescued and chained as oarslaves in the Seatalon’s hold.

- Tarquin and Mariel are rescued by Rawnblade aboard the Waveblade.

- The Seatalon reaches Terramort. Dandin, Durry, and the rest of the oarslaves are freed by Joseph and his band. Joseph slays Captain Catseyes. They are taken to the TRAG (Terramort Resistance Against Gabool) hideout.

- Mariel, Tarquin, and Rawnblade are taken to the TRAG hideout. Mariel, Dandin, Tarquin, and Durry are reunited. Mariel is also reunited with her father.

- Oak Tom arrives at Redwall with news that Graypatch’s crew has built a cage for the oarslaves.

- (Night) The last 12 oarslaves are freed by Clary, Rosie, and Thyme. They are escorted back to Redwall by the squirrels, Rufe Brush, Oak Tom, and Treerose. Pakatugg remains behind to battle the searats. Clary, Thyme, and Pakatugg are killed. Rosie escapes, badly wounded.

Day 15 - Flagg and Mellus find the terribly wounded Rosie and take her back to the Abbey.

- The crew of the Darkqueen, reduced to 18, attempts to return to the ship. Remaining crewmembers are slain and/or captured by various things. Graypatch is slain by Oak Tom.

Unnamed Days (Seasons?) Later - The great bell is hung at Redwall as it’s inscription that could only be understood by a badger Lord said. It is named the Joseph Bell.

- Tarquin marries Rosie and they have 12 leverets. They begin the Fur and Foot Fighting Patrol.

- Oak Tom and Treerose are married.

- Rufe Brush attaches the sword of Martin to the weathervane at the top of the Abbey during the Bell-raising feast.