Bultip, descendant of Pallum the Peacekeeper, and Aubretia, descendant of Brome, arrive at Redwall and share the story of Martin’s youth in Cavern Hole.

Four Seasons Later - Luke and his tribe capture a searat galley. Luke gives Martin his sword and charges him to protect the caves. Martin takes the oath of a Warrior. Luke sets off on his voyage to fight against searats.

Unnamed Seasons Later - Martin wanders far away from the tribe’s caves to chop firewood. He and his grandmother, Windred, are captured by Badrang the Tyrant and Badrang takes his sword.

Unnamed Seasons Later - Brome leaves Noonvale after an argument with his father, Urran Voh. Laterose sets out after him later with Grumm Trencher. 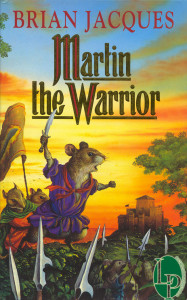 One Season Later – Day 1 - Martin is tied to two poles on the walls of Marshank. He swears vengeance against Badrang.

Laterose and Grumm arrive outside Marshank and promise to help the warrior survive.

Day 2 - Martin is thrown into the prison pit with Felldoh the squirrel and Brome.

Keyla the Otter makes initial contact with Laterose and begins plans with Martin to free the three in the prison pit.

Day 3 - Grumm tunnels into the prison pit and the three slaves escape from Marshank.

Cap’n Clogg and his crew return to Marshank in longboats and begin attacking it.

Martin, Laterose, Felldoh, Brome and Grumm steal one of the longboats, unaware of their state, and escape from Marshank via the sea. The boat begins to sink and a large fish attacks them. The group is separated; Martin, Laterose and Grumm in one group, Felldoh and Brome in another.

Day 5 - Martin, Laterose and Grumm washed ashore north of Marshank. They are captured by a tribe of pigmy shrews and forced to play nursemaid to their “Squidjees” (dibbuns). They meet Pallum, a kind hedgehog.

Martin and the others gain their freedom from the pigmy shrews after he rescues the Queen’s son, Dinjer, from a large Gannet.

Day 7 - Martin and the others meet Polleekin, a wise old molemaid. She gives them some cryptic directions to Noonvale and warns them that hardships await if they return to Marshank.

The Rosehip Players con their way into Marshank and rescue half of the slaves. Felldoh slays the traitor, Druwp.

Celandine goes missing after tripping during the escape.

Day 8 - Martin, Laterose, Grumm and Pallum meet the Mirdop family. After having some tea, they enter the swamplands and camp for a night. They are captured by cannibal lizards while they sleep.

Brome disguises himself as a rat named Bucktail and steals into Marshank.

Day 9 - Martin and his friends are rescued from the cannibal lizards by the Warden of Marshwood Hill, a great heron. He begins leading them to the end of the marshes.

Disguised as Bucktail, Brome frees the remaining slaves of Marshank by leading them to safety via the tunnel into the slave pit.

A battle ensues between the freed slaves and Badrang’s forces. The slaves escape with minor casualties.

The freed slaves hold a feast to celebrate. Brome and Felldoh leave the festivities and make a false trail that leads Badrang’s trackers into the swamplands. Felldoh slays five of the ten.

Day 10 - Martin saves the Warden’s life. He thanks them and leaves them when they reach Boldred’s Mountain. The group encounters the Gawtrybe, a band of savage squirrels, for the first time.

Badrang’s forces gain entrance to Marshank through the slave tunnel in the prison pit.

Clogg’s crew swears allegiance to Badrang. Clogg is made a slave.

The freed slaves begin training with weapons for the prospect of war with Marshank.

Day 12 - Martin and the others reach the Cherry Orchard and meet Aggril, an old, eccentric hedgehog. He puts them to sleep using a potion, believing the Cherry Trees belong to him.

Day 13 - Martin, Laterose and the others awake on an otter boat, bound to meet with the shrew’s who will take them directly to Noonvale. They board the shrew boats and set off for Noonvale.

The Rambling Rosehip Players put on a show for the freed slaves.

Day 15 - Felldoh sets off for Marshank. Brome, Keyla, and Tullgrew follow him. Felldoh goads Badrang into a duel. He beats the stoat with his javelin, much the way Badrang beat slaves, and Badrang’s horde slays Felldoh, who takes many of them with him.

Keyla returns to camp to get reinforcements.

Martin helps the moles uproot a dead sycamore tree. A picnic is held celebrating the completion of the task.

They set out for the river to rendezvous with the otter boats and travel down river to Marshank.

Many other beasts, including hedgehogs and shrews, join the otter boats.

Boldred flies off to rouse other help.

The Fur ‘n’ Freedom Fighters arrive at Marshank and begin attacking the fortress.

Day 16 - Martin and his army, consisting of the otters, hedgehogs, shrews, pigmy shrews, Gawtrybe, Boldred and the Warden of Marshwood Hill, arrive at Marshank and relieve the weary Fur ‘n’ Freedom Fighters.

Martin slays the Tyrant and retrieves his father’s sword. He grieves for Laterose.

Day 17 - Aftermath of the Battle of Marshank.

The Fur ‘n’ Freedom Fighters journey for Noonvale. All except Rowanoak, Grumm, and Pallum, who take the wounded Martin to Polleekin to heal.

Brome takes Rose’s body to be buried in Noonvale.

Tramun Clogg emerges from a grave he had dug once they all have left and begins talking to Badrang’s body like a madbeast.

One Season Later - Martin decides to leave Polleekin’s house and journey south, unable to return to Noonvale and the memories it holds. He vows never to speak of Noonvale or of Marshank, lest he unknowingly send evil beasts there. Saying his goodbyes, he sets off south to new adventures.