Chickenhound the fox, son of Sela, escapes from an adder’s lair, permanently scarred. He blames the Redwallers, vows to take his revenge on them one day, and changes his name to Slagar the Cruel.

Unnamed Seasons Later - Slagar kidnaps Auma the badger and is pursued by her father, Orlando the Axe.

Unnamed Days Later - Slagar and his band of slavers camp in St. Ninian’s abandoned church. Vitch, a young mouse-like rat is sent to Redwall as a spy for Slagar. 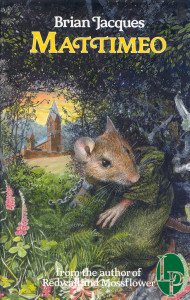 Slagar poses as the Lord of Mountebanks, the mysterious leader of a traveling band of entertainers, gaining entrance to Redwall.

Mattimeo, son of Matthias the Warrior, Cynthia Bankvole, Tim and Tess Churchmouse, and Sam Squirrel are all taken captive by Slagar after he slips a sleeping drug into the drinks of the adults and exits the Abbey.

Day 2 - The residents of Redwall awaken to find their children stolen and a few adults slain by Slagar and his band.

The Redwallers bury and mourn their dead.

The team splits when Basil injures his paw.

Matthias, Jess, and Basil meet Cheek the otter on the deserted slavers’ cart.

The captive young ones meet Scurl the newt, who tells them he can set them free in exchange for some of their things. They give him various baubles, but he runs off without helping them.

The slavers capture Jube (short for “Jubilation”) the hedgehog.

Day 4 - Martin the Warrior appears to Abbot Mordalfus in a vision instructing him to “Seek the Founder in the stones where the little folk go.”

Baby Rollo finds a trail of ants, or “little folk”, and the older Abbeybeasts follow it to an underground monument of Redwall’s first leader, Abbess Germaine. A stone tablet comes loose from the statue. It is deciphered as another riddle.

Matthias and Co. meet Orlando the Axe, father of Auma the badger, and Jabez Stump, father of Jube. They decide to track Slagar together and set off to the south. They catch Scurl along the way. He reluctantly tells them about their young ones and exactly which direction they were heading.

A dagger dropped by a stoat is found by the young woodlanders and is used to pick the locks on their chains. After the vermin doze off, the young ones escape into a river nearby.

Matthias, Basil, Jess, Cheek, Orlando, and Jabez catch up with Slagar and rush into a cave they think his band is in, but are trapped inside by a landslide begun by the fox.

The young ones run out of hiding to help, but are captured once more.

Day 5 - Log-a-Log and his Guosim shrews free the trapped woodlanders from the cave and agree to help them.

The stone tablet is found to have some letters filled with green dye. Unscrambled, the letters spell “abbey top crow”.

Warbeak and the Sparra assist by flying to the roof of Redwall and making a rubbing of a map and yet another riddle printed on the crow statue there.

Day 6 - The Abbeybeasts make copies of the rubbing and give them to the Sparra.

Warbeak and her warriors fly off to find Matthias and the others to give them their findings.

Ironbeak, the raven, and his fighters kill off the remaining Sparra in the rooftop of Redwall Abbey.

After receiving a signal from Slagar, Stonefleck, the rat, drops two ladders from the top of a large cliff. Slagar’s slavers and their captives climb to the top and pull the ladders up, prohibiting anyone from following them.

The Redwallers, Orlando, Jabez, and the Guosim set off toward the cliff while Skan, the former Guosim shrew, betrays their position to Slagar.

Slagar enslaves Skan and his few followers despite their help. The slave line reaches the forest of the painted ones and they are attacked, but narrowly escape with their lives.

Day 7 - Matthias and Co. meet Sir Harry, the owl, who flies to the cliff top and drops the ladders for them to climb.

They arrive at the forest and are assaulted by the painted ones. Jess captures their leader. They reach the edge of the forest, near the bank of a river.

Slagar and his slave chain cross the river.

A barrier is erected across the dormitory’s entrance to Cavern Hole to stop the birds from entering freely.

Day 8 - Cornflower, Mrs. Churchmouse, and baby Rollo are captured by Ironbeak and his birds.

In Redwall, the Abbeydwellers plan a trap for the magpies of Ironbeak’s small army.

Day 9 - The woodlanders, headed by Matthias, are attacked once more by Stonefleck and his army, but defeat them with the help of Warbeak and the Sparra, who show up just in time.

Warbeak is slain by an archer.

The Sparra give Matthias a copy of the map and poem and turn back toward Redwall. The rest continue south after Slagar and his slavers.

The magpies arrive in Redwall’s orchard, gathering food. They eat the berries Sister May had drugged and are caught in fishnets set by the Abbeybeasts.

Ironbeak agrees to swap hostages and does so in the evening. However, while the exchange is taking place, the rest of his birds were gathering supplies from the orchard and had moved down into the infirmary and dormitories, leaving Cavern Hole the only safe haven.

Foremole and his moles create a tunnel system from Cavern Hole to the pond, orchard, and gatehouse.

Day 10 - The slave line arrives at a huge, seemingly-bottomless canyon and crosses it, severing the bridge after them.

The woodlanders that are tracking Slagar arrive at the rift and with Sir Harry’s help, they slide across on a piece of rope from the broken bridge that is connected to Orlando’s axe. Jess swings across last with the large weapon.

General Ironbeak and his fighters attempt to steal Redwall’s tapestry, but are stopped.

The Sparra arrive safely at Redwall once more.

Cornflower dons the Warrior’s armor which Matthias left behind and plays the part of Martin the Warrior’s ghost. With Constance, the badger, using her booming voice, frightening Ironbeak’s forces.

Slagar departs with Nadaz and his blackrobed rats, Vitch, and the slaves, leaving the rest of his band behind.

Day 11 - While the remainder of Slagar’s band battle for leadership, the woodlanders overcome them. Disarmed, the vermin are taken captive.

Cheek spots the Lord of Mossflower, a gigantic fir tree, in the distance. They set off toward it.

Cornflower resumes her role of Martin’s ghost, further discouraging Ironbeak and his birds.

Slagar and the slave line arrive at the Kingdom of Malkariss, previously Loamhedge Abbey, which had sunk beneath the ground in an earthquake.

The woodlanders reach the huge Lord of Mossflower and follow its shadow to the hidden entrance of Loamhedge.

Day 12 - Stryk Redkite sees Redwall from afar and, with a broken wing, makes her way toward it.

The captured vermin of Slagar’s band are banished from the area and are followed closely by Sir Harry the Muse to ensure their departure.

Stryk arrives at Redwall and she is attacked by Ironbeak’s fighters. Constance rescues her and brings her into the Abbey. Stryk’s injuries are tended to.

Matthias, Jess, Basil, Cheek, Log-a-log, and the Guosim all enter the Kingdom of Malkariss, searching for the enslaved young ones. They meet Nadaz and his rat horde and battle ensues.

Slagar escapes above-ground via a secret passage. Cornflower, Constance, and Sister May continue to plague the birds with the phantom of Martin.

Day 13 - Matthias challenges the horde to bring forth their best warrior. Wearet, the slavemaster, is chosen. Matthias is thrown off of the edge of a tall platform down onto a basket containing Malkariss himself.

The old polecat is attacked by the many slaves previously forced to build his kingdom and he is buried under a small mountain of rocks.

Matthias releases the slaves from their chains. They are anxious to take revenge on their captors. They join the battle above.

Constance is locked in the gatehouse by Ironbeak as she deposits the armor inside.

Log-a-log is wounded in the large battle that follows the duel between the Wearet and Matthias. A number of the shrews remove him from the area and stumble upon the cell of the young ones. They are set free.

Led by Mattimeo, the children meet with their parents to help with the battle.

Day 14 - The woodlanders stand triumphant against the vanquished blackrobed horde. They destroy the giant white polecat statue representing the polecat and his kingdom and make their way to the surface once more.

Slagar slays Vitch. Spotted by the woodlanders, Slagar retreats, but falls to his doom into a large pit leading back down to Loamhedge.

Stryk Redkite, wing healed, attacks the raven and his forces.

Constance breaks free of the locked gatehouse and assists in the battle.

Ironbeak is slain by Stryk. Constance slays Mangiz. The surviving birds are thrown from the Abbey, but are mercifully unharmed.

Unnamed Days Later - Matthias and Mattimeo, Jess and Sam Squirrel, Tim and Tess Churchmouse, Orlando the Axe and Auma, Basil Stag Hare and Cheek the otter, the Guosim, Sir Harry, and any of the former slaves who had no home to return to arrive at Redwall Abbey.

One Day Later - A new season begins and Abbot Mordalfus names it “Autumn of the Warriors’ Return”. A great feast is held, both in honor of the new season and the returning of the young ones.

Jabez and Rosyqueen Stump, along with their daughters and Jube, move into Redwall’s cellars with Ambrose Spike.

Constance begins training Auma to be the next Mother of Redwall.

One Season Later - Mattimeo becomes Redwall’s Champion. He and Tess have a child. The name of “Martin” is bestowed upon him.