Unknown Season - – Four otter families escape a corsair vessel. They come upon a hollow mountain, its peak above the water. They fight a battle with the monitor lizards that inhabit the island and win. They name the island Ruddaring.

Unnamed Summer - The crew of the vessel, Waveworm, captained by Conva the stoat, slaughters the otter Holt of Lutra, leaving only Lutra’s daughter, Grath Longfletch, alive (but, badly injured).

Six perfect pearls, called the Tears of All Oceans, are stolen for Ublaz “Mad Eyes,” Emperor of Sampetra Island.

Grath Longfletch is found by two watervoles, Glinc and Sitch. She is taken to their home and nursed.

Two Months (2 moons or 68 days) Later (Autumn) - The weasels, Flairnose and Graylunk, steal the Tears of All Oceans.

Guosim shrews are attacked by robber foxes. Martin II, the Warrior of Redwall, aids them in driving the foxes away.

Three Days Later - Flairnose is found. He tells Conva that Graylunk stabbed him and took the pearls. He then dies of his stab wound.

Unnamed Days Later - Graylunk arrives at Redwall Abbey with the pearls and a skull wound. He is taken in.

Unnamed Days Later - Tears of All Oceans are given to Fermald the Ancient. She hides them in various spots around the Abbey.

Unnamed Spring (5 seasons later) - Martin I appears to Wallyum Rudderwake, leader of Holt Ruddaring, telling him to help his friends triumph over evil. Wallyum does not remember this dream. 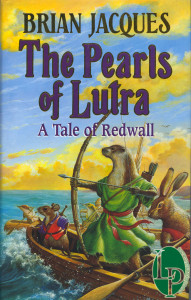 Martin II, Foremole, Wullger the otter, and Friar Higgle investigate the skeleton and discover it is the skeleton of Graylunk.

Conva is forced to sleep in the barracks of the flesh-eating monitor lizards for failing to bring Ublaz the Tears of All Oceans.

The Waveworm, now captained by Romsca the ferret and sailing with the monitor general, Lask Frildur, and a score of monitors, sets out for Mossflower to retreive the Tears of All Oceans.

Day 2 - Ublaz sends his gulls to Mossflower to spy on the Abbey and find the pearls, if possible.

Conva is hypnotized by Ublaz’s strange eyes and jumps out a window to his death while thinking he is a bird.

Ublaz hypnotizes a coral water snake he has trapped below the palace.

Grath Longfletch kills the crew of the Sprayraider. She takes the lifeboat as her own.

Rollo the Recorder finds the first riddle left behind by Fermald the Ancient.

Tansy and Friar Higgle are attacked by the gulls. One is slain by Gerul.

Martin II, Rollo, and Tansy begin the search for the Tears of All Oceans.

The container for the pearls (a scallop shell) and the riddle to pearl #1 are found in Fermald’s attic.

Martin I appears to Tansy in a dream.

Captain Barranca is double-crossed and slain by Rasconza the fox.

Viola bankvole and Abbot Durral are taken captive by monitors.

Pearl #1 and riddle for pearl #2 are found in the Great Summer candle.

Pearl #2 and riddle for pearl #3 are found in the barrel of the drink called Cup of Cheer.

Lask Frildur delivers an ultimatum to the Abbey: the Tears of All Oceans in exchange for the return of Abbot Durral and Viola.

Martin I appears to Tansy in a dream, again.

Day 4 - Martin, Skipper, Clecky, and Gerul attack Frildur’s forces before dawn. They later battle the rearguard left behind to slow them up.

Pearl #3 found in the pond.

Martin and Clecky attack the Waveworm from shore with the help of Grath, who is nearby.

Unnamed Days Later - There is a battle on the decks of the Waveworm. All are slain except Durral and Romsca (who has a mortal wound).

One Day Later - Romsca dies from her wound, telling Durral to continue sailing west to Sampetra, saying her friends will take care of him.

Day 5 - Rasconza strikes a deal with Ublaz: his loyal service for a share of the plunder and Supreme Captaincy of the fleet.

Martin, Clecky, Grath, and Viola meet up with the Guosim shrews.

Martin swears to bring the Abbot home to Redwall.

Skipper and Gerul arrive back at the Abbey.

Riddle to pearl #4 found on the binding of Fermald’s fishing rod.

Riddle to pearl #5 found in a house martin’s nest, but, pearl #4 stolen by jackdaws.

Log-a-Log and the Guosim arrive at Redwall. A search is mounted for the “missing” Viola.

Ublaz foils Rasconza’s plans of secretly sailing away from Sampetra by removing the tillers and rudders of all the ships, promising new ones.

On the Freebeast, Viola is discovered.

Day 6 - Freebeast hits an iceberg and gets stuck on it. Bladeribb is killed.

Tansy, Craklyn, Piknim, Rollo, and Gerul follow a jackdaw to St. Ninian’s Church in hopes of finding pearl #4. They are viciously attacked by the jackdaws. Piknim is killed before rescue arrives. Pearl #4 found.

Ublaz lets Rasconza sail away on the Bloodkeel, which he has secretly holed. It sinks, killing all crew except Rasconza and Guja.

Day 7 - Rasconza, who has made it back to shore, continues to threaten Ublaz. He sets up a meeting with Ublaz for the following day.

Martin and friends meet the seal king. The seals begin the journey to Ruddaring, a hidden holt in the northern seas.

St. Ninian’s burned to the ground.

Pearl #5 and riddle to pearl #6 found in the tapestry.

Wallyum remembers when Martin I appeared to him, and offers Martin II any help he can.

*Midnight* Tansy, Craklyn, and Rollo solve half of riddle #6 and find the other half.

Ublaz lays a trap for Rasconza which fails because his Trident rats have joined Rasconza’s side.

Pearl #6 found in a carpenter bee’s nest by Arven. He gives the pearl to Tansy.

Clecky creates a diversion and is chased all over the island by the Wave Bretheren.

Martin, Plogg, and Welko steal the Waveworm from the jetty and sail it to a small cove on the east side of the island.

Viola and Welko torch five of the vessels, sparing the best ship, Freebooter. They are then forced to fend off searats and corsairs who wish to save the last ship. They are saved by the sealfolk.

Martin and Clecky free Durral; then Clecky, Inbar, and Grath take him from the palace.

Martin battles Ublaz. Ublaz is killed by the venom of the coral water snake.

Seaking leaves Sampetra, headed for Ruddaring, where Inbar and Grath plan to spend the rest of their days together.

Unnamed Days Later (Autumn) - Martin I appears to Tansy in a dream again, telling her to go to the shore and wait for a sea king.

Martin I again appears to Tansy, telling her the Abbess will know what to do with the pearls.

Tansy throws the pearls back to the seas. She then becomes Abbess.

Unnamed Days Later - Viola takes over for Sister Cicely in the Infirmary. Craklyn takes over as Recorder for Rollo. Durral becomes a Friar.