An old Rufe Brush and Durry Quill tell the tale of the Redwallers journey to Southsward and the battle against the Urgan Nagru over the course of three days.

Finnbar Galedeep’s family is murdered by searats. The Pearl Queen is stolen from him by Cap’n Slipp and his brother, Strapp.

Unnamed Seasons Later - A fox find a dead wolf, skins him and takes his name, becoming the Urgan Nagru.

Unnamed Days Later - Rab Streambattle takes his otter guard from Castle Floret after Gael Squirrelking refuses to listen to him.

Unnamed Days Later - A hedgehog named Burrom takes a young squirrel named Benjy, a young mousemaid named Wincey, and a young ottermaid named Figgs. They flee from Southsward and make their home on the Isle of Wrecked Ships.

Unnamed Seasons Later - Bowly Pintips is kidnapped by the slavers, Spurge and Agric, and is forced to serve them. 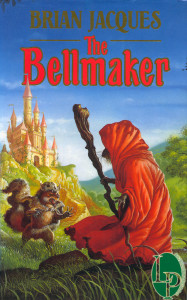 Day 1 - Joseph the Bellmaker dreams of Martin the Warrior who gives him a message.

Day 2 - Joseph remembers what Martin told him and recites a poem of Southsward’s plight.

Day 4 - The Guosim set off to take Joseph, Rosie, Durry, Rufe, and Foremole to the seashore.

Day 6 - Mariel and Dandin arrive in Southsward. They meet Bowly Pintips during his escape attempt and become friends.

Finnbarr, with the help of the Guosim and Redwallers, steals back the Pearl Queen while the crew was celebrating on Cap’n Strapp’s ship. They set off to find the Roaringburn, with Strapp close on their heels.

Day 7 - Blaggut, former boatswain of the Pearl Queen, is reunited with Cap’n Slipp when he rows ashore on a small boat. Slipp orders Blaggut to take them to a stream (The River Moss) to take them inland.

Mariel, Dandin and Bowly teach the slavers a lesson.

Rab Streambattle helps Gael Squirrelking and his family escape Castle Floret. Gael is captured again, but Queen Serena and Truffen get away.

Rab and the badger nursemaid seemingly perish holding the forces of the Foxwolf at bay while the Queen escapes.

The Pearl Queen hits a rock which breaks a hole in the hull.

The mousebabe and Furrtil get lost while playing in Mossflower Woods. Redwallers begin searching for them.

Mariel, Dandin, and Bowly save the mole, Furpp, and his family from some of Nagru’s horde. During a battle, they are saved by Field Marshal Meldrum Fallowthorn and his nephews. They all retire to Furpp’s hidden dwelling and learn of Nagru’s tyranny.

Rosie and Durry are swept overboard in a storm and lost at sea.

Day 8 - Blaggut and Slipp find the missing Dibbuns. They are later found by Oak Tom and his wife, Treerose, and taken back to Redwall. Blaggut and Slipp pretend to be a carpenter and a cook to be allowed to stay at Redwall. Secretly, they plan to find the “hidden treasure” of the Abbey.

Rufe Brush begins to develop a deep friendship with the Guosim shrew, Fatch.

The Pearl Queen is beached in toadlands. They are attacked by masses of toads, but are spared when Hon Rosie and Durry intercede. The two had fallen and saved the toad kings life and were considered “Bulgums” (gods/creatures of magic).

Mariel, Dandin and Meldrum battle Nagru’s forces and kill his Dirgecallers, allowing Serena to escape. The trio are captured by a furious Nagru, however.

Finnbarr repairs the hole in the Pearl Queen.

The Pearl Queen escapes the toads, who wished to have Rosie and Durry stay with them forever.

Day 9 - The Pearl Queen is attacked by sharks. It’s tiller is damaged.

The “Phantom” (Simeon) begins trailing Slipp and Blaggut in the Abbey.

Mariel, Dandin, and Meldrum break out of their cell. They free Gael and a shrike named Glokkpod, and fight their way to a tower, where they are cornered in the attic.

Blaggut builds the mousebabe and Furrtil two boats so they can “sail” on the Abbey pond.

Redwallers decide to hold a concert. The Abbeydweller who recites the best song will win a silver chalice from Mother Mellus. The mousebabe and Furrtil win.

Day 10 - The Pearl Queen makes landfall at the Isle of Wrecked Ships. The crew meet Benjy, Figgs and Wincey. The three young ones agree to guide them back to Southsward, hoping to reclaim their home.

Glokkpod flies off to find Bowly and get help. A plan is formed to rescue those in Castle Floret.

Castle Floret begins to be plagued by the “ghosts” of Rab Streambattle and Muta.

Blaggut kills Slipp and brings the chalice back to Redwall. He then departs to live by the Seashore and build boats.

Gael, Meldrum, and Dandin escape over Castle Floret’s walls. Mariel is pursued inside. She meets Egbert the Scholar, who takes her to his friends, Rab and Muta, now silent warriors with no memories.

The Pearl Queen once again finds the Roaringburn.

Mariel, Rab, and Muta take the gatehouse of Castle Floret, gaining control of the drawbridge.

Day 12 - Bowly gets an army of hedgehogs, led by Gawjun and Deekeye, to join the Southsward Army.

Mice and squirrels soon join the Southsward Army. They choose the broom as their symbol, for they will sweep the Foxwolf’s forces out of Southsward. The army begins marching towards Castle Floret.

Egbert provides Meldrum, Dandin, and the otters with access to Castle Floret via a hidden tunnel.

The crew of the Pearl Queen meet a large otter army and begin marching towards Castle Floret to do battle with the villainous horde.

Urgan Nagru leads a force out of Castle Floret to deal with the otters attacking the castle.

The drawbridge is closed and locked by Muta. They lose the gatehouse. Battling vermin, Dandin, Meldrum, and the otters join Mariel, Rab, and Muta. The group is cornered in a lower section of Castle Floret.

The crew of the Pearl Queen and the otter army arrive at Castle Floret. They are led inside by Egbert. They save Mariel, Dandin, and the others. Fatch is killed by Silvamord. The vixen flees, but is pursued and later slain by Rab Streambattle and Muta.

The crew of the Pearl Queen leave Castle Floret and save the Southsward Army from an ambush. Urgan Nagru flees, but is pursued by Finnbarr.

Egbert the Scholar is appointed Castle Librarian and Archivist of Floret, Official Recorder for Southsward Country and Dynastic Concordance Coordinator to the House of Gael.

Meldrum and Hon Rosie find out that Meldrum is related to Tarquin.

Joseph promises to make a bell in remembrance of those who died freeing Southsward. He decides to stay in Southsward while the others return to Redwall. Joseph is appointed King’s Advisor, Honorary Commander to the Army of Southsward, and Lord Warden of Floret.

Joseph gives Finnbarr’s twin sword to Rufe and Durry as a sign of their bravery.

One Season Later - Blaggut arrives at Redwall with news of the Pearl Queensailing into the River Moss, marking the return of those who left.

Mariel, Dandin, Bowly, Hon Rosie, Durry, Rufe, and Foremole arrive at Redwall. A great feast is held in honor of their return.

One Season Later - Mariel, Dandin, and Bowly leave Redwall to sail on thePearl Queen to find what lies over the horizon on the sea.