FAR Past - The lake where Castle Kotir once stood dries up due to a drought that lasts three seasons. The surrounding swamplands turn into firm ground. All that remains is a small pond, which later becomes the Abbey pond. The south part of Redwall is built over Kotir.

Past – Unnamed Season Cornspurrey De Fformello Tussock runs away from home to join the Long Patrol. His father never forgives him for it. 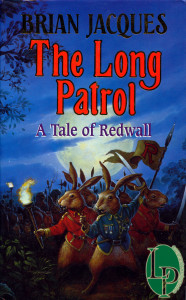 Mem Divinia has her son, Tamello De Fformello Tussock, run away from Camp Tussock with Russa so he can become a Long Patrol hare.

Day 2 - Damug Warfang tosses the blade of the Firstblade. The blade lands flat side up (through trickery on Damug’s part).

Tammo and Russa run into two ferrets, Skulka and Gromal. Russa defeats them, but they run back to their vermin band for reinforcements.

Day 3 - Tammo and Russa are attacked again, this time by the entire horde. They manage to escape only through the help of Major Perigord Habile Sinistra’s Long Patrol. The Long Patrol continues to track the vermin.

Borumm and Vendace attempt to assassinate Damug. But, Damug catches them unaware and shackles them (along with Lugworm).

Tammo is captured by the Painted Ones when he’s gathering watercress for the Long Patrol.

Damug has the remaining scouts stand in the river as punishment for not defeating the shrews. Borumm and Vendace escape and lead the scouts away from Damug. They kill Lugworm first.

The Long Patrol rescue Tammo from the Painted Ones and capture their leader, Shavvakamalla, ensuring safe passage through the forest. They later let Shavvakamalla go.

Day 5 - Before Dawn – A large beech tree falls on Redwall’s South Wall, destroying most of it.

The Mole Crew digs underneath the wall and finds a large cavern/hole.

The Redwallers discover the little owl, Orocca, trapped in the beech tree with her three eggs. They move her into the Abbey where she makes her home in the apple cupboard.

Tansy ventures into the hole beneath the South Wall.

The Long Patrol engages in battle with the vermin horde when they begin hounding a helpless badger and a babe. The grown badger is found to be dead, but the Long Patrol rescues the babe.

Russa is injured in the battle.

Most of the vermin horde die in the swamplands whilst running from the Long Patrol. Only one makes it out alive.

The Long Patrol buries the badger and Russa.

Day 7 - The badger babe is named Russano after Russa.

Sloey falls into the hole beneath the South Wall and is attacked by a snake. Skipper dives to her rescue and they disappear in the underground current. Sloey is pulled back to the surface.

Log-A-Log meets up with Gurgan Spearback and his hedgehog family. Together they journey towards Redwall to warn them of Damug Warfang’s coming.

Gurgan finds a hole with water flowing out of it. Plugging the hole, the ground surrounding it collapses and out comes Skipper admist a flow of water.

Redwall holds a Council of War in Cavern Hole.

Rinkul the ferret returns to Damug’s horde with news of Redwall. Damug becomes determined to march there.

One of Damug’s horde captures a male squirrel.

During the Council of War, Martin the Warrior speaks through Tammo. He gives Redwall cryptic instructions on how to protect the Abbey from war.

Day 8 - Log-A-Log leads a crew to dam up the river, stopping the flow of water beneath Redwall.

Midge and Tammo reach Damug’s camp. Rockjaw stays out of sight so as to not arouse suspicion.

Tammo sneaks out of the horde camp to contact Rockjaw, then returns.

Day 9 – Midnight - Tansy, Friar Butty, and Craklyn discover that the hole is actually part of old Castle Kotir, which the south part of Redwall was built over.

Tansy, Craklyn, Butty, Shad and Foremole find Verdauga Greeneyes’ treasure, but become trapped in Kotir after a cave in. They begin searching for another way out.

Cregga marches ahead of her Long Patrol, then collapses from sheer exhaustion.

Cregga is attacked by rooks. She’s saved by her Long Patrol.

Perigord and the army of Redwall march to the ridge in preparation for the upcoming battle.

Midge tells Damug how he would overrun Redwall if he attacked the ridge first. Damug becomes convinced and orders his horde to march the following morning.

Midge and Tammo rescue the squirrel, Fourdun, and escape from Damug’s camp. They are pursued, but Rockjaw covers their escape, sacrificing his life so that they might get away.

Tansy, Craklyn, Shad, Butty and Foremole escape from Kotir, emerging in Mossflower woods. They return to Redwall with their findings.

Midge, Tammo, and Fourdun reach the ridge. They report to Major Perigord.

The Rapscallions pitch camp in sight of the ridge.

Day 12 - The Rapscallions break camp and attack the ridge.

The army of Redwall and the Rapscallions lock in battle.

The Rapscallions gain the upper hand, but their chances are dashed as Cregga and her army of Long Patrol hares arrive on the battlefield.

The Rapscallions are defeated.

Cregga is taken to Redwall to recover.

The Redwall army remains at the Abbey to repair the South Wall.

Tammo’s family travels from Camp Tussock to Redwall for his marriage to Pasque.