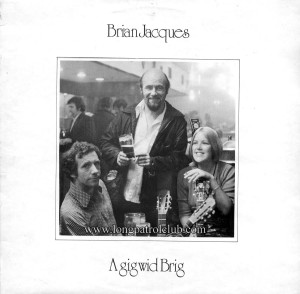 A Gig wid Brig, Brian’s second album, is a far different beast than Swallow the Anchor. Put very simply, The Liverpool Fishermen were a musical group and their album was (with one exception) filled with songs. Here, Brian & Co. are entertainers first, musicians second. What you get is a recording of a live show, complete with quiet moments, audience interaction, jokes, all in addition to the singing. It makes for a far more entertaining album, actually.

The show was recorded live at The Boggery Folk Club/Old Moselians Rugby Club in Solihull, Warwickshire on Monday, March 25th 1974. The album is credited to Brian Jacques and Brigantine (hence “a gig/show wid/with Brig/Brigantine”). “Brigantine” appears to simply be the name that the trio of performers– Brian Jacques, Liz Crampton (his partner), and Tony Higham– went by. Brian and Liz’s presence are very easy to detect throughout the album, but Tony remains relatively silent, generally providing guitar accompaniment and letting the other two do the entertaining.

Interestingly, the album’s back cover says Higham has been performing with Brian since his Liverpool Fishermen days, but Higham wasn’t mentioned on Swallow the Anchor (although he does bear a resemblance to a man on the album’s cover).

The album consists of nine tracks (called “bands” on the record label), four of which are combination tracks of two or more segments. It clocks in at approximately 49 minutes in length. Lyrics for some of the songs can be found here.

The show starts off with Liverpool Home, written by Peter McGovern, a song that also appeared on Swallow the Anchor. “We thought we’d start with the national anthem,” Brian tells the audience before he begins to sing. He handles the vocals alone, for the most part, with Liz and the audience (with some encouragement) joining in on the chorus. There are a few changes to the lyrics from the Fishermen version of the song, chief being the line “The Germans they threw at us all that they had” changing to “And Hitler he threw at us all that he had“. Political correctness or personal choice? Hard to say. There were other alterations, as well, mostly minor, which you can see for yourself on the accompanying lyrics page (you’ll notice a new verse at the end). The song still remains extremely enjoyable and is a great way to get things started.

Fokkers is a humorous story Brian tells of a Polish pilot who flew with the RAF during the war. The punchline involves the man’s Polish accent and the German plane, the Focke-Wulf. I leave you to fill in the blanks.

Needless to say, it’s a very different Brian than we’re used to seeing, but pretty funny!

James Russell is mainly a story about the search for inspiration for an old ethnic folk song. It’s less defined than Fokkers was and ultimately boils down to a single joke to set up the end of the track, Folk Song.

Folk Song is Brian singing (what else?) a folk song he wrote that was published in Yennoworrameanlike. Its a humorous tale about a young lad pursuing a beautiful maiden he chanced to spy, a tale that ends with him having a bedpan (tossed from twenty stories up!) stuck on his head. It’s done in a traditional manner, unlike any other tracks, giving the song a unique flavor to it (plus hearing him do the voices throughout is always entertaining– he had to pause and clear his throat a few times before attempting to sing the part of the maiden).

The third track is another compilation, this time of Memoirs of a wet night and Boghole Monologue.

Memoirs of a wet night is basically set-up for Boghole, and is Brian relating the story of waking up with a hangover. “Now, y’know, when you wake up, 12 o’clock some Sunday morning. And you’ve missed that past 11 mass. . . . . . and you’re sort of lyin’ there, y’know, and you’re lookin’ at your suit hangin’ up. On the floor.” An experience the audience seemed able to relate to.

It’s all set-up for Boghole Monologue, though, which is another poem Brian wrote about a fellow who, while leaning over the toilet the morning after a night of drinking, is hit in the head by the toilet seat (“You might laugh, but this happened to me this morning.”) and accidentally pulls the chain and gets sucked away. Unlike Folk Song, this poem is simply recited, not sung.

For the fourth track, Brian turns the floor over to Liz, who sings the song Someday Soon, written by Ian Tyson. It relates the story of a young girl who falls in love with a rodeo rider against her parents’ wishes. Liz’s voice is deep and clear, and there’s a definite sadness to the song (which rounds out side one).

The fifth track (starting off side two) is another song sung by Liz, this time Woody Guthrie’s Deportees. If you listen closely, you can hear Brian join in on the chorus, but it’s clearly Liz’s song to sing. The song is about Mexican workers who cross over into the U.S. illegally, work the fruit fields, then have their wages seized and are deported back to Mexico. Guthrie wrote it in response to a plane full of these workers crashing in Los Gatos Canyon, with none of the names of the passengers recorded, simply the word “Deportee”. It’s the first song on the album that references the social movements one expects of the time period, providing nice insight into the issues that concerned Brian and Liz at the time.

The sixth track is the Robin Hood Monologue, which consists of two stories about the legendary hero– one about his death and burial, the other about saving a candle maker from the Sheriff of Nottingham– both written and recited by Brian.

The seventh track is another compilation, Timothy Winters and Pastores a Belem.

Timothy Winters is a poem written by Charles Causley, which Brian and Liz sing as a duet, alternating verses before singing in harmony. It’s another social critique song, telling the story of a poor boy named Timothy Winters who deals with one hardship after the other, but remains happy as can be, because he’s just a child.

Pastores a Belem is a Puerto Rican Christmas carol that is sung by Liz– in Spanish. Due to that, there’s very little I can tell you other than the fact that it’s a very pretty song to listen to, with some of the same melancholy that is present in Someday Soon and Deportees (something Liz does very well).

The eighth track is Horizontal Lil, a recitation of a humorous poem that Brian wrote (it was featured in Get Yer Wack under the title “Mining Camp Murder”). It’s the story of a hash-house waitress and the gunfight that results between her current love and a man who’d done her wrong (with very humorous results).

The ninth and final track is yet another compilation with two parts: Dockland Hassite and Leaving of Liverpool.

Dockland Hassite is the final monologue of the album and consists of Brian telling stories about working on the Liverpool docks– the nicknames the workers had and so-forth (some of which appeared in Get Yer Wack and Jakestown: My Liverpool).

The show is then closed out with Leaving of Liverpool, which still remains a slam-bang way to wrap things up. The song is about a sailor leaving Liverpool, bound for California, and promising to marry his love upon his return. Numerous Liverpool landmarks are referenced. Brian tries to get everybody involved on this one, audience and performers alike. It’s the only track where Tony Higham noticeably contributes to the vocals, as he sings an entire verse of the song. (Liz also handles some.) Minor changes in the lyrics from the Swallow the Anchor version can be seen on the lyrics page.

As I mentioned earlier, A Gig wid Brig was very different than Swallow the Anchor. The latter was very much a group of mates getting together and singing drinking songs and the like, and the album was recorded in a controlled environment to suit the music. A Gig wid Brig, on the other hand, had a far more traditional folk group feel to it and the songs ranged from upbeat (Liverpool Home) to the melancholy (Deportees) with humorous stories and jokes told inbetween. Audience applause could often drown out the speaker, but at the same time it conveyed the energy of the show, which was contagious. Brian would often interact with the audience inbetween lines, explaining the lyrics or commenting on his favorite part. At other times, he’d simply pull out anecdotes, such as “They have an old saying in Liverpool, that a red sky at night is a shepherd’s delight, and a red sky in the morning means Birkenhead’s on fire.” to keep the laughter rolling.

Furthermore, with The Liverpool Fishermen, Brian was one of many. His contributions were easily noted, but it was very much a group effort. Here, more of his personality shines through and the show is given a far more personal touch. It allows you to get to know Brian better than you did before, which is worth the price of admission.

A Gig wid Brig is hard to find, but very worth it. Highly recommended.

Brian Jacques and Brigantine are definitely entertainment, vulgar, funny, nostalgic, enthusiastic, sad, swaggering, sweet, but never boring. Their material ranges from the sublimely to the gorblimey, with the characteristic Liverpool accent and earthiness proudly in evidence. Brigantine’s stamping ground is the North West, based in their hometown of Liverpool they range across Lancashire into Yorkshire and down to Cheshire and Flintshire equally at home in pubs, cabaret, art festivals, happenings and student unions as they are in folk clubs.

Brian Jacques the Head Serang is largely instrumental in the revival of the monologue on the folk scene, a native “scouse” with a face like the Dock Road (before it was re-surfaced) ail that Jake seems to require of life is a cigarette, a pint and an audience as he readily demonstrates on this album with such gems as “Horizontal Lil” and “Folk Song” which are only two of the many epics he has written over the years.

Tony Higham is a guitarist of no mean skill having accompanied Jake since the good old, bad old “Liverpool Fishermen” days. Tony plays both classical and flamenco guitar and is a far more gentlemanly fellow than the other ruffian (Jacques) with whom he has made several television appearances and two previous albums.

Liz Crampton could have had a successful singing career on any scene. The power, clarity, and sweetness of her voice need no selling to audiences in fact she doesn’t need a mike most of the time. Liz plays guitar and gives full justice to Charles Causley’s “Timothy Winters” and the old faithful roof lifter “Leaving of Liverpool”. Many thanks also to the great audience who were with Brigantine every inch of the way, but as Jake later remarked “We managed to shake ‘em off at the station”.