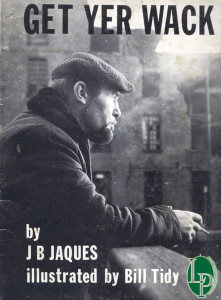 In the 1960s, Brian Jacques was a frequent entertainer in Liverpool pubs. Whether it was singing folk songs as part of The Liverpool Fishermen or reciting poems of his own creation, he eventually got noticed by the right people.

In 1971, his first book, Get Yer Wack: A Liverpool Anthology was published by Anvil Press, an English publishing company that specialized in independent poetry. The book would be reprinted in 1973 by Raven Books, a Liverpool-based publishing group that was run by ex-Liverpool University students who became very keen on publishing Brian’s work after hearing him perform at the university’s folk club.

Get Yer Wack is a 47-page anthology of short stories, anecdotes, and poems all written by Jacques, who sets the tone at the start with the dedication: “I wish to thank all the breweries who manufactured all the ale which got me so sodden drunk, that I got the inspiration to write this book.” It might be better described as a booklet or pamphlet, truth be told. Curiously, Brian is credited as “J.B. Jaques” on the cover.

The book is divided into five chapters, each with a different area of focus. Chapter 1, for instance, focuses on drinking, drinking songs, and humorous stories concerning drunks (none of it autobiographical, I’m sure.

Chapter 2 focuses on the Liverpool docks and what it’s like working there. Chapter 3 sets religion in its sights, and Brian retells the stories of Adam and Eve, Moses, Samson and Delilah, and so-forth with a Liverpool accent and sensibility (with very humorous results). Chapter 4 is more downbeat, full of poems and stories about aging and death, be they persons, streets, towns, or countries. Finally, Chapter 5 is entitled “Miss Helanius” (which I’m sure you’ll catch right away) and is where Brian stuck everything else he had for the book– recipes for scouse, poems about bingo, famine, church, the military. Anything goes.

Anyone who’s ever read the humor pages in Reader’s Digest will find the format of the book familiar, as it rolls from one anecdote or poem to the next. Bill Tidy’s full-page cartoon illustrations only reinforce this image. The artist’s work complements Brian’s stories nicely.

Transitions from one piece to another could have been handled better, with more overt sectioning, but that’s really nitpicking. Once the reader adjusts to the flow of the book, it becomes easy to follow along.

Content-wise, there are plenty of laughs in here. The Biblical retellings especially stand out and seem to delight Brian the most. One particular joke that made me laugh had to do with a child who was told to draw a picture of the flight to Egypt, so he drew a Jumbo Jet flown by “Punchus the Pilot”. (Ah, Biblical jokes.)

The book has very little in common with Brian’s later Redwall work. In fact, the only poem that shows any sort of connection is “The Officers Mess”, which hearkens back to squabbles in the Long Patrol regiments (although with far more deadly results here), but I’m sure this is more coincidence– such as a shared source– than anything else. Ultimately, that’s okay– perfect, even. They represent two different eras of the author’s life and provide a far more intriguing picture than either would have all by itself.

As a first work, Get Yer Wack doesn’t begin to compare to Redwall (they are different beasts, after all), but it provides wonderful insight into Brian’s life and personality before he became a world famous children’s author. That alone makes it worth tracking down and reading.