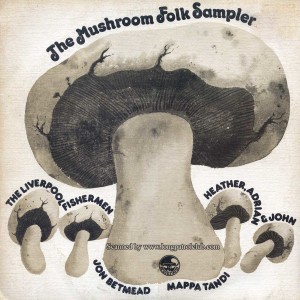 In the 1960′s and 1970′s, Mushroom Records was one of the most prominent labels on the U.K. folk music scene. They released numerous albums, among them The Liverpool Fishermen’s Swallow the Anchor.

In order to promote their artists, in 1971 Mushroom released The Mushroom Folk Sampler, a collection of fourteen songs by four of the groups/artists on their label. It was a way for folk fans to try out the artists and hopefully seek out their actual albums afterwards. On the Sampler, Jon Betmead contributed three songs, as did the group Heather, Adrian & John. The Liverpool Fishermen contributed four songs and so did the group Mappa Tandi. The album was recorded on Monday, October 25th, 1971 at the Chalk Farm Studios and runs approximately 47 minutes in length. Lyrics for the songs by The Liverpool Fishermen can be found here.

One of the interesting things about this album is that it sounds like the various artists simply gathered in the studio and began putting on shows for each other– almost like peers competing to entertain one another (“Nice, now listen to this”… which is not an actual quote, just an impression.) Applause follows each song (although not raucous, as in A Gig wid Brig, suggesting a small audience– i.e. the artists themselves and a small staff) and the artists will sometimes set up their songs before they begin singing. It serves to give the Mushroom Label an almost familial quality that was enjoyable.

Since this is a Brian Jacques site and The Liverpool Fishermen are what interest us, I won’t be devoting much time to the other artists– I’ll just give you a quick overview.

Jon Betmead starts things off on Side One with the songs Dandelion Blues, Winding Boy and Playboys & Playgirls. Of the entire album, Betmead is the most traditional sounding of the bunch– soft-spoken and accompanied by an acoustic guitar. Social commentary also finds its way into his songs, with the likes of Lyndon Johnson and Richard Nixon garnering mentions/critiques.

Heather, Adrian & John are thematic kinsmen of Betmead, rounding out Side One with their songs Woman Sweeter than Man, Lark in the Morning and Seth Davy. While not quite as socially relevant as Betmead’s songs, the group is just as soft spoken and traditional sounding, making them a good fit for one another.

The Liverpool Fishermen start off Side Two (more on them later) and are followed by their thematic kinsmen, Mappa Tandi. Tandi’s four songs, Quar Bungal Rye, Mrs. McGrath, Hi, Germany and Spanish Lady are very in keeping with the lighthearted, often humorous songs that typify the work of The Liverpool Fishermen (although they’ve got more of an ethnic sound to them). It might actually have been better to start Side Two with Mappa Tandi, as they have more in common with the groups on Side One, and then flow into the Fishermen, but Mushroom must have had its reasons.

Now, as for the contributions of The Liverpool Fishermen– they brought over three of their songs from Swallow the Anchor (whose release preceded this Sampler): Yate’s White’s Blues, The Ould Triangle and Home Boys Home. A fourth song, Maid of Fife, is unique to this album.

Running through them, as I said in the Swallow the Anchor review, Yate’s White’s Blues is a drinking song in every sense of the word. The arrangement is virtually the same as the one on Swallow the Anchor, with the same singers singing the same verses (although the applause shows that it’s a new recording). It serves as a rather sudden change from the soft songs of Betmead and Heather, Adrian & John, being far more upbeat. It shifts the tone of the album and we’re off from there.

Next, we have The Ould Triangle (written by Brendan Behan) which is, again, a song about life in Mountjoy Prison in Dublin. Brian is once again the lead vocalist and it’s word-for-word what appeared on Swallow the Anchor. Despite being a more melancholy song than Yate’s, it sounds positively boisterous after the soft-spoken songs from side one.

Which brings us to the new piece, Maid of Fife. It’s a peppy song (sung in unison by most of the Fishermen) that tells the story of a troop of Irish dragoons whose captain falls in love with a chambermaid from Fife (although some feel the locations mentioned in the song suggest Fyvie over Fife… but since the Fishermen title it “Fife”, that’s what we’ll go with). The song is a good fit for the group and serves as kind of a middle ground between their usual songs (i.e. Maggie May) and Foggy Dew from their first album– taking the humor of the former and mixing it with the national pride and history of the latter. The end result is another fun song that’s easy to sing along to.

Finally, they close out their section with Home Boys Home, a lighthearted song about a sailor longing to be home in his own country. As with the others, it’s the same arrangement that appeared on Swallow the Anchor (plus applause).

As it’s intended function– serving as a sampling of folk artists on the Mushroom label– The Mushroom Folk Sampler is a resounding success. The four artists/groups are unique enough to not run together, but have enough in common that someone who enjoys one would probably enjoy the others (and thus be enticed to track down their individual albums).

As an album for Brian Jacques/Liverpool Fishermen fans, it’s more of a mixed bag. If you have neither, Swallow the Anchor is definitely the album to go after first, as three of the four songs here are found on it (and ultimately the applause-less versions sound better). From there it boils down to the question: is Maid of Fife worth buying The Mushroom Folk Sampler for? For collectors (like me)– absolutely. It’s another song to add to your Brian Jacques library. That alone sells it. For anyone else? Probably not. I like the song, but the price you’re likely to find the album for is rather steep for a single song (even if you’d be able to enjoy the other artists, as well). It ultimately comes down to you.

All things considered, though, The Mushroom Folk Sampler is a fun listen.

We hope you will enjoy listening to the Mushroom Folk Sampler. The album includes Jon Betmead, Heather Adrian and John, and Mappa Tandi, all of whom are making their debut on this album. Also featured are the Liverpool Fishermen whose first L.P. Swallow the Anchor (Mushroom 150 MR 9) was released earlier this year. The wide appeal of the album makes it a must for every folk collection.

JON BETMEAD
John Betmead (guitar, vocals) a gentle blonde giant of 6′ 5″ has been professional for three years. He has appeared regularly on B.B.C.’s “Country meets Folk”. His favourite habitat is Morocco. He is heavily influenced by primitive blues, Polynesian and Pacific ethnic music, jazz and Dylan. On side 1 his rich earthy voice features “Dandelion Blues”, “Winding Boy” and “Playboys & Playgirls”.

HEATHER, ADRIAN & JOHN
Formed as a duo in January 1971 by Heather Smith (vocals) and Adrian Bell (guitar, Appalachian dulcimer) they were joined later in the year by John MacDonald (bass). As a result of their unique and sincere presentation they have built up a big following in concerts and clubs in London and the Home Counties. On side 1 they feature “Woman Sweeter than Man”, “Lark in the Morning” and “Seth Davy”.

THE LIVERPOOL FISHERMEN
These broths of boys need no introduction. Born and bred in Dublin they now live and work on Merseyside. Their raucous rollicking style epitomises the character of these two great cities. On side 2 they feature “Yate’s White’s Blues”, “The Ould Triangle”, “Maid of Fife” and “Home Boys Home”.

MAPPA TANDI
Mappa Tandi, being Pat Ludford and Jim Kenealy, are no newcomers to the folk scene. Pat (12 string guitar) and Jim (fiddle) met at the Lorna Doone Centenary Folk Festival at Minehead, Somerset in 1968. Since then they have toured clubs in Ireland, Wales and England. They have made London West End appearances at Tottenham Court Road and Oxford Circus Underground Stations. On side 2 they feature “Quar Bungal Rye”, “Mrs. McGrath”, “Hi, Germany” and “Spanish Lady”.