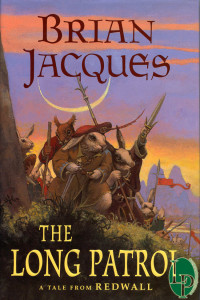 I recommend reading Mossflower prior to reading The Long Patrol, as it will help you fully appreciate the story!

The Long Patrol is Brian Jacques tenth novel. It was published in Great Britain in 1997 and in the United States in 1998. The Long Patrol is about a young hare named Tamello De Fformelo Tussock, who wishes to join the Long Patrol of Salamandastron. His father, a retired Long Patrol Colonel, argues that he is too young and Tammo is forbidden to join. With his mother’s help, Tammo runs away from Camp Tussock with his mother’s squirrel friend, Russa Nodrey. The two travel far, then are captured by a wandering band of vermin. Almost giving up hope, they are liberated from the vermin by Major Perigord Habile Sinistra and his Long Patrol. Tammo is elated and is allowed to join the small Long Patrol as they continue to track the vermin band, who the Major explains is part of a vermin band known as Rapscallions. The Rapscallions, who had been defeated at Salamandastron by the Badger Lady Cregga Rose Eyes and her hares, had retreated to south shores to lick their wounds. The Greatrat, the leader of the Rapscallions, had been seriously injured and died. His two sons, Damug Warfang and Byral Fleetclaw, fought a duel to the death with Damug emerging as the victor! After rallying the Rapscallions, Damug cast the sword of the Greatrat into the air, letting it land on the ground. The sword had two sides: one wavy, representing the sea; one flat, representing the land. Fixing it so that the flat side would land up, Damug ordered the Rapscallions to march inland. At Redwall, a great problem threatens the Abbey. Arven the Warrior, Foremole Diggum and the mole crew have discovered that the Abbey’s south wall is sinking! The cause is unknown, and Abbess Tansy and Craklyn the Recorder join the party and begin searching for a solution as to why the wall would suddenly sink. In the south, Damug Warfang’s Rapscallion horde marches on– right towards Redwall Abbey!